CoinWeek reported on December 27 that PCGS will partner with HID Global to begin embedding high security Near Field Communication (NFC) chip technology in slabs starting in early 2020. There will be apps for NFC-enabled smartphones to verify the slabs are authentic, and to display the information on the slab. Typically NFC readers need to be 4cm or closer to read the chips. It may be possible to read the chips from a few feet away using a giant circular antenna.
Posted by Ed Snible at 11:55 AM No comments: Links to this post

I recently noticed that Changes at Corpus Nummorum Online is greatly enlarged. Many new coins, and a new search engine. This project is worth keeping an eye on.
Posted by Ed Snible at 8:58 PM No comments: Links to this post

These aren't bars that are short of gold. The fakes are said to contain legit gold, but stamped with the names of refineries that did not issue the bars.

It is said to be a way to launder conflict gold. Many of the forged bars are said to originate in China.

Posted by Ed Snible at 11:00 AM No comments: Links to this post

It is difficult to search for these stories, because there is a crypto currency also called “Italian Lira”. The crypto version has a total market cap of 1 BTC (about $14,000 USD).

Posted by Ed Snible at 1:42 PM No comments: Links to this post

Last Monday I toured the Massachusetts studio of the sculptor Daniel Chester French. He designed the Lincoln memorial. There are quite a few pictures of the memorial on Twitter today. The pictures are taken from behind temporary fencing erected for tonights' Salute To America.

The memorial was intended to show the difficulty of Lincoln as the decision maker during the Civil War. Lincoln knew his actions would lead to many deaths. French's monument is a powerful representation of the necessity and undesirability of war. Even if you have seen the actual memorial it is enlightening to see the earlier, smaller versions, that the artist used to work out the design.

The actual sculpture was carved right here in the Bronx in 1922 by the Piccirilli brothers. They were Italian immigrants. An article by Lucie Levine points out "The brothers faced anti-immigrant sentiment even as they worked to realize some of the United States’ most patriotic sculptures.... The Lincoln Memorial Commission rejected French’s suggestion to have “Piccirilli” inscribed on the pedestal of the Lincoln Memorial."

Posted by Ed Snible at 8:23 PM No comments: Links to this post 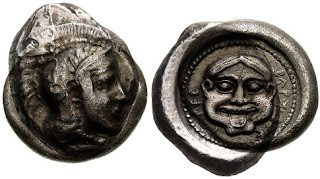 DYNASTS OF LYCIA. Kherei, circa 430-410 BC. Stater, Tlos mint.
Obv: Helmeted head of Athena to right.
Rev: 𐊜𐊕𐊁𐊕𐊚𐊆𐊛𐊋-𐊗𐊍𐊀𐊇𐊆 (Lycian; =kerẽi-tlawi); Gorgoneion within border of dots in a circular incuse.


There are two or three known examples. The photo is my composite of the Jameson specimen and the example auctioned in Switzerland by Nomos.

The inscription is in Lycian and names the ruler and the city of issue.

Posted by Ed Snible at 9:31 PM No comments: Links to this post 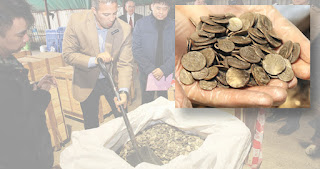 A Coin World article by Paul Gilkes reports that the US Mint has suspended the Mutilated Coin Redemption Program “pending the development of additional safeguard”.

As previously reported here, the US government pays $19.84/pound for dimes, quarters and half dollars that are bent, broken or corroded. Chinese recyclers were returning 'coins' that did not have the metallic composition of original coins. Every year millions of dollars of such coins are somehow being found in China by firms that recycle cars and electronic equipment.

Posted by Ed Snible at 7:55 PM No comments: Links to this post