The ANS library has 99 numismatic books published in 1927.

1927 wasn't a big year for numismatic works. The only book published in 1927 that I have read, and that was reprinted, is George Hill's Select Greek Coins. This work didn't become public domain today. It was published in the UK, and already became public domain in 2018 or 2019, 70 years after Hill's passing.

You won't find Select Greek Coins online. Google Books only knows it by the unauthorized 1974 reprint.

Hunter had some odd coins

The Greek coins were published the 1890s in three volumes (v1, v2, and v3; the author was George Macdonald). Some of the coins, like this tetradrachm, are unique. 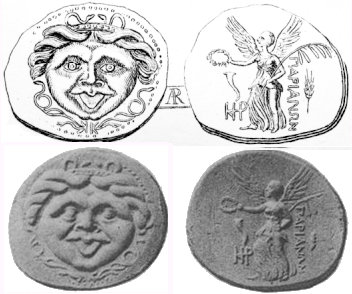 Although hemidrachms of this denomination are common in museum collections, this tetradrachm is unique. Nothing like it has shown up in 300 years.

This unique coin was first published by M. L. Dutens in 1776. George Macdonald assigned the tetradrachm to 200-133 BC – the period before the start of the Cistophoric-weight tetradrachms. Barclay Head dated it post-190 BC. Presumably he chose 190 BC to place the series after the Battle of Magnesia. This dating is odd because the hemidrachms were dated to 400-300 BC. Both Head and Macdonald thought this was 100 years later.

It is possible that this is an 18th century fantasy. It would be worthwhile to look at all of the unique coins in Hunter's collection to see if they have any traits in common. Of all the coins in all the world's museums, this tetradrachm is the one I'd most like to inspect in person.

The artistic style doesn't look Roman, nor does it look like the bronze barbarous radiates struck in Gaul imitating Roman coins. 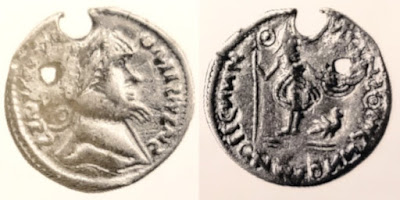 This is a gold aureus. It is from Andrei Sergeev's collection and currently in the State Historical Museum in Moscow. The photo is from the book Barbarian Coins on the Territory Between the Balkans and Central Asia (Moscow 2012; it is coin #224). It is with other coins found 'between the Balkans and the Dnepr basin'.

Sergeev's catalog includes four other Ukrainian gold aurei from the same period. They are called Roman imitations, and perhaps they are, but perhaps they are not. They sometimes have pseudo-Roman inscriptions like IMPM... AXMINV. 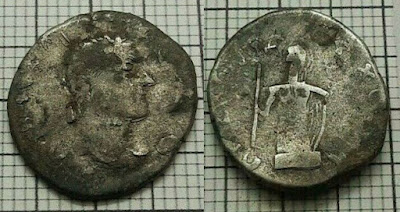 Here is a silver coin find, said to have been found on the territory of western Ukraine, Khmelnytsky region near the Dnister river. This is about 500 km from Translyvania where the "Sponsian" coin was found. According to Vital Sidarovich, this type has also been found in south-west Belarus, in the area of the Wielbark culture. Often these types imitate Roman emperors, but this one doesn't seem to.

It is not clear if the inscriptions are portraits are always imitations of things seen on Roman coins. There is no reason they couldn't depict local chieftans.

Elsewhere, Barry Murphy has suggested the Sponsian coin is a cast imitiation. I haven't inspected it personally, but it looks struck, but corroded which gives it a cast look.

XRF through a slab?

I tried to XRF an archaic Greek coin in an NGC slab. 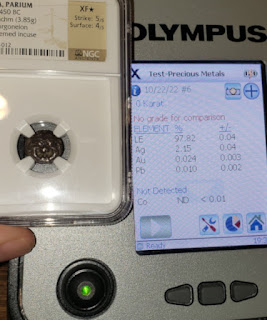 LE stands for “Lighter Elements”. For this machine, this means Mg, Al, Si, P, and S. (The machine has a way to break this down, but it isn’t my machine, and I didn’t figure out how in the time that I had.)

I gave up after a single test.

According to the blog from a different XRF manufacturer, XRF can be used through slabs. So I decided to take a look at the numbers I got.

Using similar calculations, gold is 1.1% and lead 0.5%. Those figures are about right for the 3.9g series of “Parion” (actually Thracian) coins.

Perhaps it is possible, with machine settings or calculations like the above, to perform XRF through slabs. Has anyone tried it before and after cracking slabs? Is there a technique that works?

Harlan Berk catalogs going back to #1 are online at the Newman Numismatic Portal.

I have had very poor luck searching for them in the NNP search bar, but the link above takes you to the whole set, which can be filtered by year.

Coins stolen from the Naples museum in 1977 are still missing 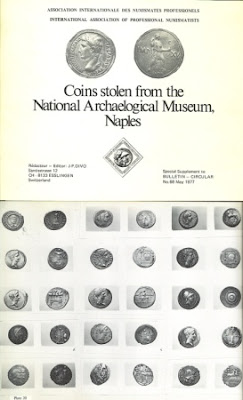 On the night of 20-21 February, 1977 at least 6000 ancient coins were stolen from the National Archaeological Museum in Naples, Italy.

Not all of the coins had been photographed, but the best 10% were. The International Association of Professional Numismatists (IAPN) published these in a special bulletin. That publication, Coins Stolen from the National Archaeological Museum, by Jean-Paul Divo (1937-2014), is rare.

A brief UPI story (no byline) from December 1980 says that authorities recovered US$40,000,000 of “ancient Roman coins, jewelry and artifacts” including a rare coin of Augustus worth $1.3 million alone.

It's unclear how many coins were recovered. The recovery included the Naples museum coins as well as coins stolen from the Antiquarium Museum at Pompeii in 1975. The UPI brief mentions 71 recovered coins.

Although the UPI claimed a single recovered coin of Augustus was worth US$1,300,000, I am uncertain what that coin could be. Only one Roman Imperial coin has sold for over a million dollars. The coin was a sestertius of Hadrian engraved by the Alphaeus Master that sold for $2.5 millionin 2008. A million-dollar Roman coin value in 1980 seems unlikely.

(A brief AP story on the Pompeii robbery (also no byline) says that robbery included “a large number of gold and silver jewels and coins”.)

UPI said in 1980 that five men had been arrested, including one who once worked as a watchman in the museum. The accused were not named and I could not find a follow-up story on any conviction or sentencing.

Jean-Paul Divo's catalog of the stolen coins is very rare today. I've only seen it offered twice; once in a group lot in Rick Witschonke's library sale, and another copy was sold on VCoins by ANE for $75.

If anyone knows what happened to the five suspects please let me know.

I hope that one day Divo's catalog will be reprinted, or that the Museo Archeologico Nazionale di Napoli, IAPN, or Divo estate make a list of the missing coins available online. A single coin that matched one of the stolen pieces could provide valuable clues as to where the rest of the loot ended up.

Next weekend, Friday-Sunday, is the FLAME Conference at Princeton university. The conference is both in-person and virtual. Sunday will feature a panel on "digital numismatics" with Ethan Gruber (ANS), Dr. David Wigg-Wolf (German Archaeological Institute), Mark Pyzyk (Princeton University), and Pavle Jovanov (FLAME freelancer at Princeton). For more infor on FLAME see https://coinage.princeton.edu/.
Posted by Ed S at 3:54 PM No comments: