Meet me in Atlantis 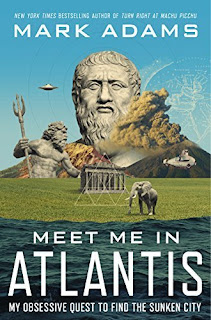 Mark Adams, Meet me in Atlantis

I will depart from my usual practice of covering coins and technology and mention a recent book I enjoyed that has little of either.

Mark Adams' Meet Me in Atlantis: My Obsessive Quest to Find the Sunken City

documents the charming cranks and visionaries who are searching for the ruins of Atlantis.

This is a semi-serious book, with a bibliography and index, yet simultaneously functions as a travel book. 300+ pages. No knowledge of Plato is required to understand the book. The author visits Santorini [= Thera], Doñana National Park in Spain, and Morocco. Candidates in Antarctica and Michigan are rejected.

The Atlantipedia website and its operator are also featured.


I wanted to briefly mention this coin because when I tried to look it up I only found two examples, one from the Lindgren collection and one in Copenhagen. Neither published the inscription, as it was illegible on their specimens.

The visible inscription seems to be NITOIN, or possible ΛITOIN. I found a larger Apollo/Lyre with the inscription ANTIOXEWN in the BMC catalog.

Mystery novels about private detectives often include a plot element where the detective and police have to work together. Both sides loath the practices of the other side. Unless the private investigator has some useful information or a long relationship with the fictional police no progress can be made on the plot. Often someone’s life is in danger because of withheld information.

Why would two groups looking to catch bad guys dislike each other’s methods so much? A person might think that both private investigators and police detectives have the same goals and should work together.

I believe this antagonism is related to the Systems of Survival concept of Jane Jacobs. In her 1992 book she explains that there are two styles of organization. Wikipedia explains:

One system is the Guardian Moral Syndrome and contains 15 precepts, like “Shun Trading,” and “Adhere to Tradition.” This system arose primarily to satisfy the needs of organizing and managing territories. It became the code for warriors, governments, religions, and some private organizations.

The other system is the Commercial Moral Syndrome and also is made of 15 principles like, “Shun Force,” and “Compete.” It came into being to support human activities around trade and the production of goods.

This mutual antagonism is in so many detective novels that I assume it is real. I haven't verified this idea with detectives of either syndrome. I have seen the principal in play among people interested in ancient coins. Today there is antagonism between coin dealers (who have a commercial moral code) and archaeologists (who follow the guardian moral code.) Archaeologists believe honor comes from publications and training grad students. They want to guard ancient coins for the future and aren’t above requesting the force of law. On the other side we have collectors and dealers who want everything to be voluntary, who shun fancy titles and seek profit through efficient business practices.

It should be expected that the two groups interested in ancient coins dislike the methods and organization styles of the other. We should not expect collectors and scholars to praise each other’s practices. If one side does something that indirectly helps the other, such as putting thousands of images online or deducing a clever attribution for an enigmatic ancient coin, respect from the other camp will not always follow. Neither side will willingly bind its own conduct to help the other.

My hope is that scholarly organizations that accept both guardian-style and commercial-style attitudes will continue recognizing the achievements of both kinds of member. Eventually out of these one-on-one interactions perhaps some new ways of collaborating will be discovered.

I recently acquired this Indo-Greek AE tetradrachm from a dealer in Missouri.

I love the detail, but the cleaning method left some really ugly colors. It looks much worse in hand than the picture.

I was wondering what folks would recommend for fixing?

Leaving it alone is also an option, but I feel this particular coin could be very beautiful with an even tone. I am asking because I have never retoned a coin.

I am also curious to know if people feel this coin was cleaned chemically or by electrolysis.