I want to call everyone's attention to a new auction site, Agora Auctions. They are already up to sale #4. I purchased a coin from sale #3 and it looks exactly like the picture. I have met the owners and they are good guys. The current auction closes on Tuesday.

Auction #4 has the usual good-quality Greek and Roman stuff but there is also some of the lesser-known stuff worth looking at. They have Parthian (including Bronze), Sasanian, and Kushan coins. I was surprised to see a Baktrian fourree. There is a nice run of medieval Islamic stuff.

For folks interested in replicas there are some Peter Rosa replicas of Greek coins in the British Museum including beautiful coins of Syracuse such as this tetradrachm, from Wayne Sayles' collection and illustrated in Classical Deception.

Museums clean ancient coins before putting them on display. Dealers and collectors often clean coins and many have their own favorite 'recipes' for cleaning.

A much bigger problem is the cleaning of paper money. The researchers Nabil Lawandy and Andrei Smuk claim that 150,000 tons worth of paper money, unfit for recirculation, are removed from circulation every year at a cost of $10,000,000,000. The researchers have developed a method using supercritical CO2 at 60°C and 5000 psi said to effectively clean both paper and polymer banknotes.

The researcher's paper is entitled Supercritical Fluid Cleaning of Banknotes.

I don't collect paper money. Do collectors typically clean it? I have seen a YouTube video (from Suriname the former Dutch Guiana!) showing obsolete banknotes being cleaned in a bucket. Three minutes in the presenter admits he's never done it before! 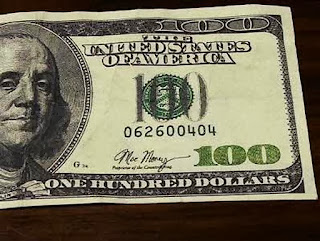 Martha Waggoner, writing for the Raleigh News Observer, reports that a 19 year old college student was arrested after passing a counterfeit $100 bill. “The signature on the bottom corner of the bill read "Moe Money" instead of the name of the secretary of the treasury. Underneath the signature, the bill read 'Proprietor of the Counterfeiting.'” Police seized a deskjet printer and ink cartridge.

Usually I don't collect Roman coins but something really attracted me to this tiny AE 8mm when I saw it at the New York International show.

The seller described it as a "barbarous imitation" of Helena / Wolf and Twins.  (The portrait could also be Fausta.) I don't think there ever was an official Roman coin with that combination.  There weren't any Roman coins quite this small.

I have never looked into late Roman imitations before. I would have expected there to be a catalog of them, either the inventory of a museum or an illustrated auction catalog with thousands of these. Does no one collect them? I would be curious to know if there are other coins like this.  I looked online and found some imitative wolf and twins on Warren Esty's site but nothing else.

I can see why it would be hard to understand the issuing tribes, given that the coins have no labels.  With unlabeled Greek coins the approach is by findspot.  For example, I have read that in Turkey the museums are entitled to everything found in their region. These museums never buy or sell.  Scholars guess the mints based on the number of samples in museum inventories. Is anyone doing statistics like that for Roman imitations?

Classical Numismatic Group recently auctioned a mysterious silver drachm as lot 114 in their recent auction at the New York International. The catalog notes the drachm is struck from the same die as Rosen 311, which is made of electrum, and Dewing 1008 (silver).

Perhaps one day sufficient specimens will exist to do a die study. I wonder if the electrum coins were struck earlier, later, or at the same time as the silver coins.

Unfortunately I didn't have a chance to inspect the coin myself. The auction photo is clear. The style of the reverse on the electrum specimen in Nancy Waggoner's catalog of the Rosen collection shows a square with a rough pattern. That reverse looks nothing like the four-part reverse on the silver specimens.

It would be unfortunate if the Rosen coin is false, as I believe an electrum gorgon/incuse to be.

I had a great time last week at the New York International. I was glad to see familiar faces. Hope everyone is having a good 2014. Feel free to reply in the comments section on this coin or any other topic related to the show or the new year. 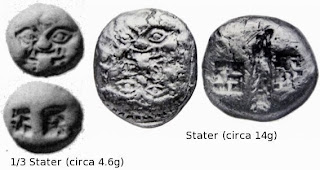 Perhaps the earliest Greek coin type depicting a gorgon was a series of rare electrum staters. We don’t know when they were struck but the style of their reverse punches suggests they were probably created before Athens struck the silver Wappenmünzen series around 520 BC. Ingrid Krauskopf and Stefan-Christian Dahlinger date this coinage to 650-600 in their LIMC entry on gorgon iconography.

These early electrum gorgons are very rare. I have only been able to find mention of two staters and four or five of the 1/3 stater pieces. Liselotte Weidauer pointed out in 1975 that both the 1/3 staters (which depict a single gorgon) and the double gorgon staters come from the same obverse die. When striking the 1/3 staters, the blank was somehow held over one half of the die.

I wish I could inspect a cast of the stater. From the published photographs it is hard to understand the border design on the double gorgon. I also struggle to see how the the 1/3 staters could receive two punches of the reverse without slipping out of the much larger obverse die. I also can’t figure out what order the reverse punches were done on the stater. It looks like the long vertical punch was applied last, which is the opposite of what I had expected, but I just can’t tell from the pictures.

Weidauer and John Kroll believe the reverse punches resemble the “I am the badge of Phanes” electrum coins depicting a deer, and they suggest Ephesos as the most likely mint. The British Museum’s 1/3 stater was apparently found on Rhodes and George Hill suggested an origin in Southern Ionia. The double gorgoneion design is very unusual. I don’t know of any other Greek examples but a similar double depiction of the Egyptian god Bes can be seen on a Philistian drachm.