Nothing is too mundane to be authenticated, if deemed potentially valuable. Cans of insect repellent used to combat the midges that swarmed the 2007 playoffs in Cleveland were authenticated. So were urinals pulled from the old Busch Stadium in St. Louis and office equipment from since-razed Veterans Stadium in Philadelphia. The Phillies are cutting the clubhouse carpet from last season into authenticated 18-by-24-inch mats.

About three million items have been authenticated by M.L.B. since 2001.

With Yankee Stadium emptied after the opening 10-2 loss to Cleveland, Lubrano watched groundskeepers shovel dirt from the mound and home plate into five-gallon buckets. Lubrano sealed the lids with tape, then stuck holograms on each bucket, lid and seal. The dirt will be divided into small containers at a warehouse, in front of an authenticator.

The article doesn't mention what happens to the dirt. It's put into “Infield Dirt coins”.

(via Market Design and Marginal Revolution.)
Posted by Ed Snible at 9:47 PM 1 comment: 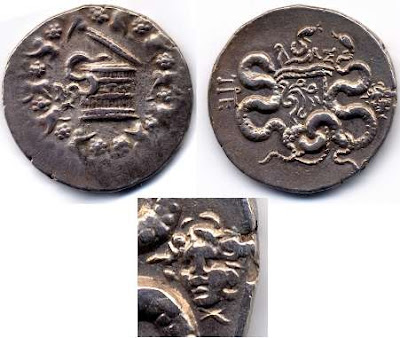 This stater of Pergamon has a small Medusa head in the right field. The ΠΕΡ monogram in the left field provides the attribution.

This coin is large, 27mm, and the Medusa head is about 5mm across. I recall F.S. Kleiner & S.P. Noe (The Early Cistophoric Coinage (1977)) date tetradrachms with this symbol to 135-128 BC. I suspect the Medusa head symbol is very scarce. There are none on CoinArchives and this is the only one I was able to spot on eBay. This specimen is reputedly from a 1995 Empire Coins list but I haven't been able to verify.

I don't know if anyone has speculated on the meanings of the symbols on these tetradrachms. I don't have my own copy of Kleiner-Noe but they did not speculate on the Medusa head.

I suspect the Medusa head symbol is related to the head on the very rare Medusa tetradrachms usually attributed to Pergamon.

This coin, which is not in my collection, is the largest silver coin made by the Greeks depicting Medusa (by size; the weight is no greater than the archaic Athenian Wappenmuenzen).

Antonia S. Faita (“The Medusa-Athena Nikephoros Coin from Pergamon”, Athena in the Classical World (2001) argues the balls on Athena, which previous writers believed were female breasts, actually represent the cities of an economic union. She writes “Athena Nikephoros ... wears an apron with seven balls, the largest one in the centre. Her left hand holds a branch with seven leafy shoots. The balls could not possibly have represented breasts, symbols of a fertility cult, as they lack the most important element of fertility, the nipples. The absence of these spherical globes from representations of Athena Nikephoros on coins dated to the Roman period clearly indicates that the globes were not depicted on the goddess’s cult statue. The globes on Athena’s pinafore are placed on an apron tied around her waist far to low to be considered breasts. The equal number of balls and shoots may well mean they alluded to the same idea.” ... “The central ball on the goddess’s apron, being the largest, represented the capital Pergamon, the seat of Attalid power; the other six, the remaining cities issuing cistophoroi.”
Posted by Ed Snible at 8:30 PM 3 comments: 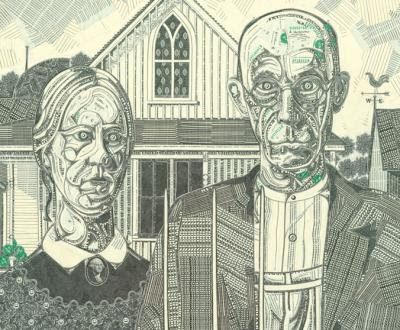 I promise to get back to posting pictures of ancient coins, but in the meantime...

... In the studio we keep hoppers of bills separated into parts to use piece by piece as well as binders of prepared texture swatches and collaged passages to add wholesale. I love all the process. For some of the collages we track how many scraps of paper are glued down. I see that sort of accounting as an interesting extension of the material. When “Liberty” is complete, for example, we’ll be able give statistics on each of her 13 panels individually, and also say that the whole thing took 1234 bills cut into 54,234 pieces, or whatever, and here’s all the scraps we didn’t use.

(via Freakonomics Blog).
Posted by Ed Snible at 9:39 AM No comments:

Publishers don't know what rights they have

Mike Shatzkin blogs about a serious issue for big publishers, their inability to remember what they have the rights to publish. (via TeleRead).

I ran into this when I wanted to 'reprint', on my web site, Admiral Dodson's COINage articles 'Counterfeits I Have Known'. COINage graciously gave me permission to reprint the text, but not the pictures. COINage didn't know if it had the right to let me do that! Luckily the photographer, the famous Ken Bresset, allowed me to use his pictures of the fakes. (I did not attempt to contact the Athens Police Department for permission to use the crime scene photos, nor the nephew of Christodoulos who engraved the fakes.)

Last year Google settled with the Author's Guild. The Guild agreed not to sue Google for publishing works as long as Google tries to get money to authors. This sounds great, but it's being challenged by Consumer Watchdog who claims that it isn't fair for Google to be the only company immune from Authors Guild lawsuits. It's not clear to me what Consumer Watchdog wants. Do they want the Authors Guild to offer a program where companies can pay not to be sued by the Guild? Google is still on the hook for lawsuits, but supposedly no one other than the Guild can mount a credible lawsuit.
Posted by Ed Snible at 1:23 PM No comments:

A BBC story (one month old) by Kathryn Westcott reports on India's search for an new recognizable currency symbol for the Rupee.

India would not want a symbol that looked bad when it was turned upside down, [Jasmine Montgomery of design consultancy FutureBrand] says - "like someone's bottom," for example.

Wikipedia reports that there are already several Rupee signs, including ₨ (that's one symbol in Unicode, not an R followed by a p) and . The symbol confuses me; I don't know how to look it up; perhaps it is the “devanagari letter ra” followed by the “devanagari vowel sign uu”.

Unicode includes other varients like the Bengali Rupee symbol.

The Economic Times lets the reader vote from 19 choices. All of those choices look something like the Latin letter R. I think India could assert its new status as an economic power house by not bowing to European fonts and insist on making the West use a two-character glyph from an Indian font: .
Posted by Ed Snible at 3:28 PM No comments:

CNG Mail Bid Sale 81 is up on the CNG home page. Over 2000 ancient coins, including 921 Peloponnesian lots called BCD Peloponnesos II. Electronic Auction 209 is also up, with nearly 500 lots of ancients.
Posted by Ed Snible at 9:49 AM 2 comments:

... readers old enough to remember in 1975 how well the fakers could replicate the tiny die polish lines found on genuine coins would be astounded by today's work.

Recommended!
Posted by Ed Snible at 10:10 AM No comments: