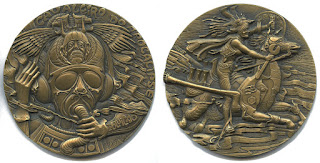 
From a series of six horsemen. Pestilence is one of the original four horsemen described in the Biblical book of Revelation. In Berardo's vision the horsemen are Peste (Plague), Fome (Hunger), Poluicao (Pollution), Morte (Death), Guerra (War), and Droga (Drugs).

For Earth Day (April 22) here is an anti-pollution medal from my small art medal collection.

Obv: Poluição (Pollution); bust of a malnourished and bald figure, turned to the right, with the hand on the forehead in sign of agony.

Rev: Girl with braids and school gown kneeling plants a tree in the ground. Next to you a shovel. Behind, four flowers, two on each side and in the sky are three stylized figures of birds.; Salve Mos o Mundo; Valadares - V. N. De Gaia / 30-VII-1972 (Save the World; Valadares - Vila Nova de Gaia - July 30 1972. Valadaras was a parish in Gaia city.)

Note: This medal was executed in the workshops of João Baptista Cardoso, for the initiation of the Promoting Committee "Recordar é viver" (Recall is living), formed by former students of the primary schools of Vila Nova de Gaia. 500 examples were made in bronze and another 20 in silver, distributed by the "Galeria Arte e Medalha", in Oporto.