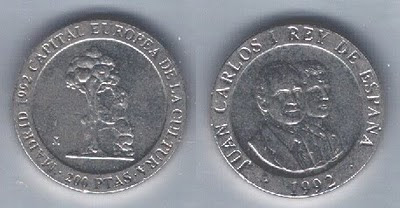 The BBC News is reporting that 60 shops in Mugardos (“a small fishing town in Galicia on Spain's northern coast”) are again accepting the peseta for all purchases alongside the Euro.

Shopkeepers were sceptical at first, but they now say the scheme is a great success.

People are travelling into Mugardos from outside just to spend the old currency they never got round to converting.

One man visited the local hardware store this week with a 10,000-peseta note he had found at home, and had no idea what to do with.

He is now the happy owner of a sandwich toaster.

I had not realized that peseta currency ”can still be converted today, but only at the Bank of Spain itself”.

(via Marginal Revolution. The coin image is public domain; from Wikipedia.)
Posted by Ed Snible at 8:44 PM 1 comment:

Museum exhibit on counterfeits (in Missouri)

The Museum of Art and Archaeology at the University of Missouri (in Columbia, Missouri) will be exhibiting ancient and modern counterfeits of coins as part of CIA: Counterfeits, Imitations and Alterations of Ancient Coins through July 31.

Tony Puricelli reviewed the show for The (University of Missouri) Maneater.

I won't be able to travel to Missouri this year; if any readers make it to the show please leave a blog comment.
Posted by Ed Snible at 10:02 AM No comments: