Unicode has included letters for the ancient South Arabian script used in Himyarite coins for a long time but I have never seen them used except in sites about Unicode itself.

I am not sure what is needed to use South Arabian script on your computer. I have a nice font of them on Mac OS 10.12 rendered under Safari but not under Chrome or Firefox.

The mint name, Raydan, is encoded as follows:


I had more difficultly with the name of the ruler. It is 𐩲]𐩵𐩬𐩽𐩨𐩺𐩬 (= ʿMDN BYN, Amdan Bayyin Yanuf). Two of the letters on the coin did not make sense. 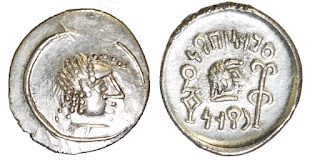 I don't actually have Stuart Munro-Hay's book Coinage of Arabia Felix so I have been using his article “The coinage of Shabwa (Hadhramawt), and othe ancient south arabian coinage in the national museum, Aden” which is available online and includes information on inscriptions.

I would be curious to know which computer/browser combinations can see the ancient South Arabian characters above. I would also be curious if anyone knows the correct Unicode way to encode the letters I am uncertain of. 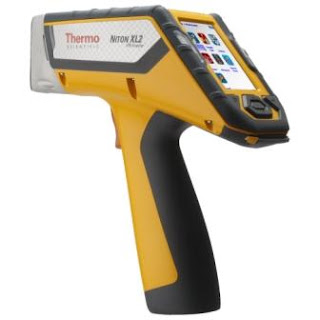 At the ANS seminar Counterfeits: the Threat to Collecting and Scholarship several people from the museum community remarked analyzing the metal in coins using X-ray fluorescence (XRF). This technique is said by some people to be nearly as good as other techniques that are much more expensive.

If a coin contains modern elements, or if a coin has a different composition than a large group of known genuine coins, then it is likely false.

I asked who can provide such a service to private collectors — but no one had recommendations.

I received an unsolicited email recently from Phil Keck at Artemis Testing Lab. They offer XRF on ancient materials for $200. Two samples per item.

An eBay search found a service in Flushing Queens that will test coins (or anything else) for $20 a sample. The auction picture shows a Niton XL2 gun. Such guns can be purchased for $15-20k. I believe they can be rented as well. I am not sure how common such services are. A friend told me several years ago of one in a coin shop in Louisville KY.

If anyone has submitted ancient coins for XRF testing I would be curious to see what kind of reports you received and if they were helpful. If anyone is near New York and wants to try the service in Flushing or knows of a similar one perhaps a field trip could be organized to test coins. Any takers? 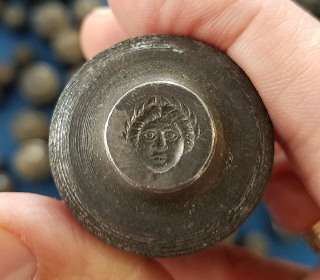 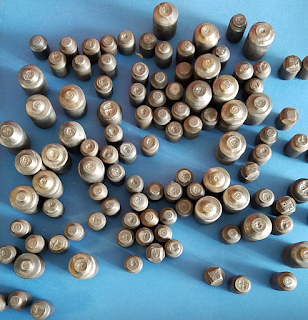 The difficulty of photographing gold coins

Here are six professional pictures of the same coin. 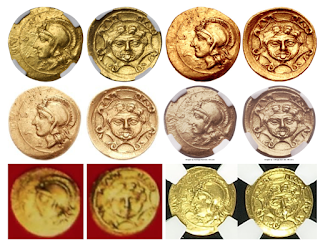 These images were taken over the span of eighteen years. The version with the red background was scanned from a printed auction catalog. All of the other images are taken directly from auction sites or the slab company's slab verification image.

This coin did not change color in the last 18 years. Something about the lighting situation and the camera's color profile was different enough that each of these pictures is different.

What color is the coin really? In my memory the coin looks like the middle coin on the left-hand side. Yet when I held the coin over my computer monitor in a room lit by compact florescent lights it looked most like the upper right image.

Can the output of my computer be trusted? In the days of CRT monitors the color balance could be tuned and there were reference images for that purpose. LCD monitors are not as color-accurate as tuned CRT monitors. Perhaps I should repeat the experiment in the sunlight? Bottom-line: I am not certain which image is the most accurate.

Xingyu Pan and imageLaure Tougne have published a paper describing their database of digits extracted from scans of modern coins.

The database of 3000+ images itself cannot be directly downloaded. They explain here that you may request it from them.

The paper is good! The databases discussed are

Although the new dataset only contains digits from modern coins the authors discuss the literature of recognition of ancient coin lettering. There are as yet no public databases of images of the digit or letters extracted from images of ancient coins.

Antiquities Memorandum of Understanding with Libya

Please read Cultural Property Observer and comment on the Libyan MOU. If the MOU is completed and includes coins it will become difficult for Americans to buy ancient coins from Kyrene in European auctions. It will also be difficult to import Ottoman coins from the territory of modern Libya.

Do it this weekend or it will be too late. 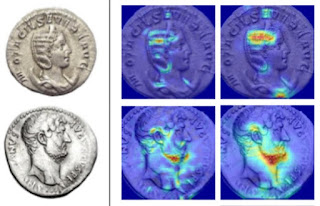 Jongpil Kim of Rutgers university reports a neural network capable of correctly recognizing the emperor 73% of the time from coin images. The reverse type is recognized 67% of the time.

I stumbled across this 9 minute video which shows the process of creating a medallion with realistic bust using a CNC machine.

The medallion produced looks quite good! It looks better than most of the 'coins' featured in do-it-yourself coin making videos. Yet most of the steps made me cringe because I was certain he was doing it the wrong way.

Once he has a 3D model on the computer, he feeds a block of metal to a CNC machine rated only for wood. I was sure something would go wrong but he got it perfect.

To produce the round shape he just takes his metal block and starts hitting it with a belt sander! I was certain he was doomed but it looked very nice when complete.

To give the appearance of patina he uses spray paint. I was amazed that this worked at all! He got a nice effect in the end.

The final medallion suffered a bit of a 'staircase effect' on the face due to the limited depth control. I would have liked to see if he could have removed that with a bit of polishing. Even with the depth artifacts he managed to produce a pretty nice medallion using techniques I would not have expected to be effective.

Print on demand catalog of the coins of Troas

I recently purchased a Print on Demand copy of Warwick Wroths 1894 catalog of the British Museum collection Catalogue of the Greek Coins of Troas, Aeolis, and Lesbos.

Google scanned three copies of this book: from the University of Michigan, from the New York Public Library, and from Harvard

The Harvard copy doesn’t seem to show up in an ordinary Google Book search. I found it using this link: http://fig.lib.harvard.edu/fig/?bib=002349380.

Public domain books that have been scanned by Google can be printed on demand. To order online, just bring up the book in Google Books, click “Get this book in print” and “On Demand Books” and several vendors appear. I wanted to see an Espresso Book Machine in action. There is one at the McNally Jackson bookstore in Manhattan. So I went down there, armed with the title.

The machines aren’t self serve. I gave the operator my title, and he brought up the University of Michigan Copy. I had hoped to see it printed but the machine apparently takes a while to download the book. It downloaded overnight and the operator printed it the next morning. I was surprised to find I had received Harvard’s copy.

The problem with getting a different copy than expected is that Google’s 2008-9 analysis did a poor job of distinguishing photo plates from line art. For numismatic books this is a problem. If the Google book preview shows a coin “posterized” the print on demand copies print it as a black blob. Luckily Harvard's copy is better than the U of M's. 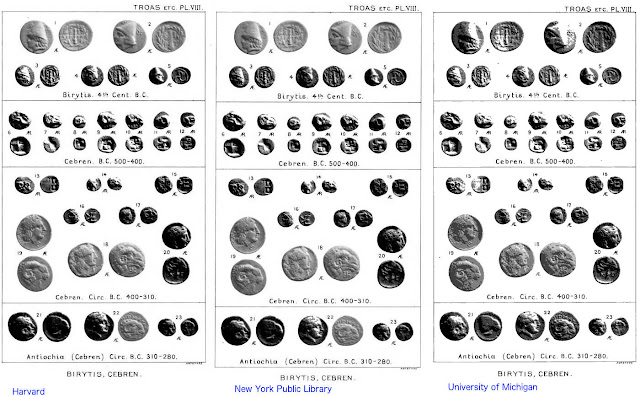 The “posterized” coins appear as black blobs when the Book Machine prints them. I am not certain this is the fault of the book machine. It is unfortunate that there is no way to supply feedback to Google books that a page or part of a page is greyscale artwork. 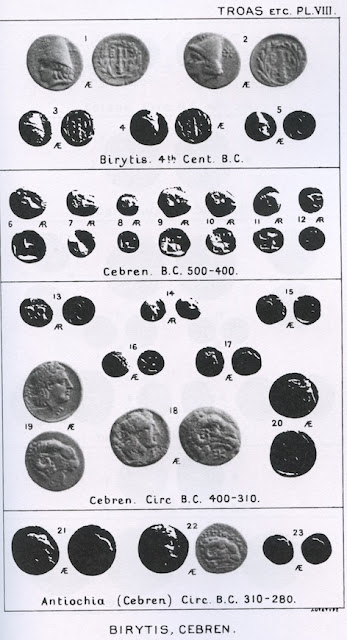 There is also no way to specify that the printed size of the page is meaningful. This is not a huge problem for the BMC volumes, which originally appeared the similar in size to what the Espresso Book Machine prints.

I paid $17 plus tax for this volume. For comparison, the hardcover decent plate Italian edition by Forni from the 1960s can be found used for $50, with other copies selling for more. The original version can sometimes be found at auction for $150+.

Many years ago I wanted to get folks with original BMC volumes to scan the plates. I had hoped to assemble a plates-only PDF. I managed to scan a few volumes myself but was not able to get the needed volumes and the project fell through. Perhaps with the British Museum putting their collection online the need for this has passed?

(via BoingBoing!): Perfume maker perfects the smell of American paper currency.
Posted by Ed Snible at 11:36 AM No comments:

ISEGRIM is a database of 60,000 Greek coins of Asia Minor developed by Otfried v. Vacano at the University in Düsseldorf. There are no pictures. Unlike other search sites, instead of filling out forms the user was to write "queries" using a special syntax similar to Lucene. Although powerful, it has been difficult for computer novices to use.

I created a proof-of-concept for searching ISEGRIM using forms. My experimental site is at http://isegrim.mybluemix.net. If you already know ISEGRIM this site still gives one advantage because it alters search responses to the BMC Greek catalogs to be hyperlinks. So if you are in the United States you can just click to go to the BMC description (then search for the plate, if any).

I sent an email to the ISEGRIM contact address but got no response. It is possible they will ask me to take it down. Or maybe they will let me contribute it to their site.

This is a proof of concept. Let me know if it helps.