A press release from Ex-Numis informs us that a company has been formed to search out lost coin provenances.

The Ex-Numis web site tells us that it will cost 5 Swiss francs (about US$5) to submit a coin image to the service. Then, if provenance is found in the company's database of coin records there will be an additional fee of 25 or 50 francs to learn what the provenance is.

New subscribers to the service can get a 25 franc credit.

I would be curious to know if any readers of this blog have tried the service and what their results have been?

Ex-Numis claims to have a database of nearly one million coin records. For comparison, the free search tool acsearch.info claims to have 2.8 million records. The subscription-bsed CoinAchives.com claims to have 'millions'. Both of these sites focus on recent sales. The American Numismatic Society's photo file, which predates the Internet, has 600,000 records.

Keep The Change: A Collector's Tales by Harley J Spiller

The full title is Keep the Change: A collector's tales of Lucky Pennies, Counterfeit C-Notes, and other Curious Currency. 112 pages, softcover. $19.95. The heart of the book is eight essays on Spiller's numismatic interests. His main collection is of damaged coins he received in change at face value. He is also interested in money manipulations by artists.

Spiller seems to be doing well with his hobby. He secured a table at the Wall Street Bourse coin show at the Museum of American Finance just to show off his collection and sell these books.

The book is severely limited by Spiller's emphasis on the material he collects and the events he was physically present for. He doesn't hunt for material on auction floors but waits to receive it in change. The book lacks ancient coins, which I have found much more likely to be damaged and corroded in interesting ways. Spiller's New York focus is also limiting: there are no non-US coins, and the chapter on burning money does not even mention The K Foundation!

I wonder where Mr. Spiller will go next. Ancient coins would be a good fit for him, as they often have very interesting corrosion collectors of ancient coins have a culture of acceptance of fine patinas. I gave Mr. Spiller a copy of the catalog of Stephen Sack's Metal Mirror with best wishes in the hopes of getting him interested.

It is difficult to assemble a collection at face value over a single human lifetime and for that we must commend Mr. Spiller for not losing focus. I recommend the book for anyone interested in either the intersection of Contemporary Art and Money.

An article by Shakti Singh in The Times of India quotes Indian Minister of State for Chemicals and Fertilizers Hansraj Ahir promising to “Pursue with the government the need to frame rules to prohibit melting of ancient coins.”

"I personally believe that melting such precious heritage is a cruel act and the government should work on making strict laws to stop it from happening," he said. "Ancient coins which form a very important proof of ancient civilization have been underrated by several generations. All they see is the value of metal the coin holds," said Ahir while addressing a three-day first international seminar on 'Gupta coinage' organized by the Coin Society of India ...

The article also quotes the former president of the Numismatic Society of India, S. K. Bose, who credits the work of coin societies in raising awareness. “Instead of melting coins [people] are coming to us to know the historic value of such coins.”

(Note that the Indian Antiquities and Art Treasures Act, 1972 allows ancient coins to be sold within India. Coins 100 years or older require permission to be exported. Think twice before trying to rescue coins dated 1916 and earlier from eBay.in).

Recently bronze coins of Mithridates have been appearing on the market in large quantities. Among them I spotted two coins with odd style. I believe they are imitations. 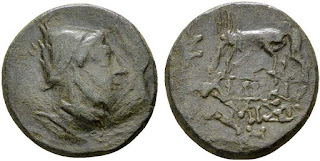 On the aegis/Nike example, the head of Medusa has a mane rather than the usual human hair. The visible part of the ΑΜΙ-ΣΟΥ inscription has the M and I connected. The same seller had other odd-style aegis/Nike bronzes for sale.

The Perseus/Pegasos bronze above seems to have an odd style as well. Perseus has a pointed noise. The griffin on the hat seems to be just a few lines. The inscription seems blundered.

Unfortunately, the coin has been triple-struck and is also quite worn. So it is hard to be sure what was really on the die and what is just damage caused by the strike.

To me the portrait looks really odd. Perseus lacks the serious expression seen on Mithridates coinage. I suspect this to be a Skythian imitation of the Perseus/Pegasos coinage of Amisos rather than an official issue.

The head of Perseus, on the official issues, is considered by scholars such as Barclay Head as depicting not merely Perseus but “Mithradates VI as Perseus”. If so, and if I am not delirious when I see the coin under discussion as Skythian, then it is possible that the new coin depicts Mithridates the Great as his Skythian subjects saw him.