Replica half shekels from Charles Larson 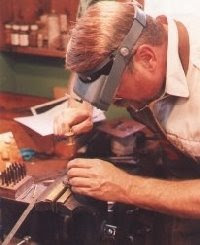 This book is so good that the ANA used the manuscript in their forgery class, then pulled the book from usage after realizing how technical it is. Imagine traveling all the way to Colorado for a counterfeit detection class whose teachers didn't think you needed to see the most explicit books! I don't know how much these classes cost but the ANA is offering one in November at the Illinois coin show and tuitition is $445.

I was wondering what Larson was up to. His web site is down, but the Internet Archive keeps part of an older version. I found that he's teamed up with Temple Mount Center in Jerusalem and is striking shekels and half shekels in silver and gold. The catalog of shekel replicas is online.

I still meet people who haven't read Numismatic Forgery. Here is what I wrote in 2004:

Although written in the style of a "how-to" manual for replica and clandestine workshops, the book's target audience is collectors and authenticators. To employ Mr. Larson's techniques for crime you'd need to know the basics of precious metal casting, tool and die machining, gunsmithing, and numismatics. For readers without a metal lathe but with a serious interest in authentication and forgery-fighting, the book will provide an understanding of the covert minting process.

I was most impressed by Larson's treatment of the manufacture of steel dies through explosive impact copying. His procedure involves modifying shotguns to drive cast hubs into annealed dies. Larson's diagrams are explicit enough to convince the numismatist that explosive copying is practical. Details only of use to criminals, such as the type and quantity of gunpowder to use, are deliberately withheld from the reader.

Larson quotes an anonymous authenticator who examined 114 1916-S quarter eagles during the 1980s. 56% of them turned out to be fake! Hi-volume forgers in the Middle East and the Orient already know many of Larson's techniques. Numismatic Forgery may provide a few useful tips to jewelers and machinists independently turning to crime, but the primary value of the book is to educate collectors in the characteristics of the illicit workshop.

A Microsoft blog announces their digitization efforts are winding down.

If you haven't visited Microsoft's book search site, there were a number of downloadable numismatic books not on Google. They also provided a good searchable interface for the books at the Internet Archive.

Access is through a creepy "drag to turn the page" metaphor. 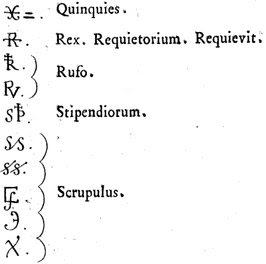 Coletius' list, which spans pages 421-445, includes symbols like the Roman Denarius Sign and Roman Sestertius Sign, recently added to Unicode in the Ancient Symbols page at code points 10196 and 10198 along with bizarre symbols I've never encountered.

The first symbol on the top of page 439 looks a great deal like the version Eckhel's printer used. Coletius explains it as 'Quinquies'. This word is aparently the 'numerical adverb' for the number 5 ('quinque'). Oddly, although Google believes there are 423,000 web pages with 'quinquies' but it is missing on most online dictionaries of Latin.

If this is the symbol, it remains unexplained why the symbol for '5' would be a good choice for the reverse of a coin, or where the practice of using it started.
Posted by Ed Snible at 6:22 PM No comments:

You may remember that the Ancient Coin Collectors Guild is suing the US Government for information on how regulations for importing coins into the US are created.

The Guild has received 34 documents from the US state department and an initial summary has been posted.

(via Peter Tompa's blog Cultural Property Observer)
Posted by Ed Snible at 7:45 AM No comments:

Google is starting to make available copies the American Journal of Numismatics (first series). The originals are coming from Harvard's collection.

The May 4th issue of the e-Sylum mentions my blog entry on the Wikipedia numismatics portal.

I started cleaning up a few Wikipedia entries but I don't want to get involved in a new project. I did notice that Exonumia, Notaphily, and Scripophily get Wikipedia articles as subfields. Numismatic Books are not even mentioned. Anyone arriving from the e-Sylum who wants to get started might consider creating the article on coin books.

An NBS questionaire arrived in the mail this week asking me to rank, from 1..100, the greatest works on American Numismatics, from a list of many pages. I lack the expertise to fill it out but it's an interesting idea.

One work on the list which I do greatly admire is the American Numismatic Society's Numismatic Literature. I'd give it #1. They have been publishing it since 1947. Some back issues can be searched online using http://64.81.216.220/cgi-bin/nlsearch.

I have multiple copies from the '70s and '80s because I bought a huge dealer lot at a CNG auction. (Email me if you want an issue or partial series for free.) (I thought I was getting a good deal from CNG at $1/copy, but then at the ANS book sale copies were being offered for free and not being taken.)

How do folks compare a 100+ issue ongoing series with a single auction catalog or short book?
Posted by Ed Snible at 7:59 PM No comments:

People, be careful out there!
Posted by Ed Snible at 9:06 PM No comments:

Ilya Prokopov has a series of books on modern forgeries of ancient coins. He puts out a new book every year with the new fakes he finds.

SP-P Publishing House has created an index of the books. It is available online on the front page. The index is provided as Microsoft Excel in addition to PDF. The Excel version lets you do spreadsheet things like sort by column.

Readers not familiar with Prokopov's work can see a sample from his forthcoming book New Fake Coin Hoards on NumisWiki. These fakes are interesting because the surfaces simulate intergranular corrosion. Until recently no one knew how to fake such surfaces.
Posted by Ed Snible at 9:18 PM No comments: