Coins that are difficult to catalog

Some coins are difficult to catalog, because scholarship is not in agreement about the origin. The attribution of this coin is apparently insecure.

A similar coin is fancifully attributed to “Memnon, Satrap in Ionien (?)” in Nachfolger auction 376 (October 2003, lot 357). This attribution was not satisfying; a similar coin (auction 386, April 2006, lot 256) was catalogued as the satrap Mazaios, 361-334 BC, struck at an uncertain mint but possible Tarsos; citing Axel Winzer (Antike Portraitmünzen der Perser und Griechen (2005)).

The Roman Coinage of Cyprus

(Via rogueclassicism).
Posted by Ed Snible at 10:10 AM No comments: 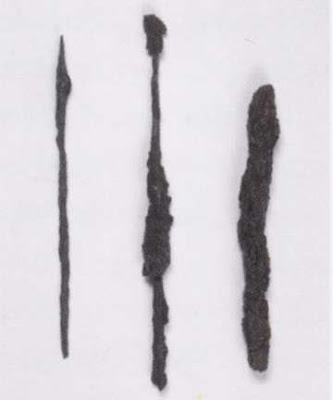 The three irregular lines are supposedly the traditional spit coinage of Sparta. The originals are in New York City for the next three weeks, as part of an exhibition, Athens-Sparta, at the Onassis Cultural Center, 645 Fifth Avenue.

Admission is free. There is a lot of amazing pottery and scuplture, nearly all from Athens or Sparta.

I was also excited about some metal toy soldiers and mythological monsters. The exhibit card said the figures had some votive purpose. Maybe they are found in temples, but I still think they are toy soldiers. A lot of Christian churches keep a room full of toys, and not for any religious purpose other than to get parents to come to Bible study class.

Anyway, the coins. A very nice group of Athenian coins, including one of the ANS's dekadrachms. Most (all?) denominations of the Athena-owl coinage are on display, including the tiny fractions.

There is also a group of coinage spits of Sparta. I have no idea how archeologists tell these spits from cooking spits, it wasn't explained in the exhibit. (There is a very nice $30 catalog of the show but I didn't get it.)

A Syracusan dekadrachm is also present. I don't know why. It is on display in the middle of the Athenian coins. It kind of looks out-of-place. I never thought I'd turn down seeing a dekadrachm but the Athenian coinage would have been more impressive without the Sicilian invader.
Posted by Ed Snible at 6:50 PM 1 comment:

This is a great development. We need more numismatic authors and antiquities experts. If you are in a band, maybe The Who or Pink Floyd, now is your chance to do something important like writing literature.

While researching this story (looking at the Wikipedia entry for Bill Wyman), I learned that he was his own grandfather. You blow my mind, Bill Wyman.
Posted by Ed Snible at 9:00 PM No comments:

BMC Crete and the Aegean Islands

(Update) The most interesting coin is lot 392, a fourée electrum 1/24 stater. The anonymous cataloger tells us that this coin proves the same mint made good and fourée coins. It would be interesting to re-examine the good specimens in light of the new piece!
Posted by Ed Snible at 11:08 AM No comments:

The Numismatica Ars Classica auction 39, auction 40, and auction R catalogs are online. The highlight is lot #8, an Akragas tetradrachm, although there is an Athenian dekadrachm with a higher estimate. Closing May 15, 2007.

The Gerhard Hirsch Nachfolger auction catalogs 250 and 251 are online. They also arrived in the mail today. The auction 250 catalog is hardcover and celebrates the 125 anniversary of Hirsch (1878-2007). The coins are very high quality.


I was just thinking about Hirsch's illustrious history this afternoon. I know they sold Imhoof-Blumer's collection in 1907. 2515 lots. I have a lot of photocopies of Imhoof-Blumer's works, and they often describe a rare or unique coin, unpictured, and say "M.S." which is German for "My Collection". It would be a nice catalog to have, or to have a CD-ROM of. I've never actually seen a copy, although the ANS has one.
Posted by Ed Snible at 9:55 PM No comments:

Google recently added a bunch more full-view and downloadable issues of the Numismatic Chronicle. Most of the 1850s issues are now available. I've updated my web page on available issues. The new issues were scanned at the UofM and the Bodleian. Thanks.

Google is still blocking most non-US countries from this material. At the bottom of my NC page is a link to access my page through a US proxy. Use that. My favorite proxy is now running advertising banners, but it isn't bad.
Posted by Ed Snible at 9:48 PM 1 comment:

The Baldwin's catalogs for the April 24-25th auctions are online

The auctions are #50, #51, and 'Islamic #12'. The Islamic auction is at Sixbid.com as interactive HTML and on Baldwin's usual website in PDF format. Baldwin's is in London but their website address is baldwin.sh, suggesting they are located on the South Atlantic Isle of St. Helena! Do not be fooled. If you are in London it is worth stopping in; I was able to get a copy of SNG Levante Supplement inexpensively three years ago there.

Auction 50 is Ancient, British, and Indian coins. Only 205 ancients, but one is an Athenian dekadrachm!

Auction 51 is foreign, medals, and books. There are only about 150 lots of books but many are group lots with several titles, and the selection of books on Indian numismatics is good.

I got the auction 50 catalog in the mail with an offprint of 51 containing just the books. I've never seen an auction offprint before. It is a good idea; books descriptions don't need to be printed on super-glossy paper. It also saves space, because I don't need the medal catalog.
Posted by Ed Snible at 10:42 PM No comments:

I visited the Industrialization exhibit at Medialia on Saturday. I'd like to recommend the show, but Saturday was the last day.

The show presented art and historical medals on the theme of industrialization. I enjoyed the show, which occupied two glass cases in the small gallery, as well as the permanent medal collection. My favorite pieces were some Japanese medals what seemed like a traditional style, and a Soviet space medal showing the Baikonur Cosmodrome behind Kazakh peasants.

Medialia is a gallery selling fine art sculpture. All the pieces are small, and most are what I'd call art medals. Until last week, I was unaware that New York even had a medal gallery. I've been to most of the shops that advertise in the ‘Coin and Stamp Dealer’ category in the phone book or whom show at the few local coin shows. Medialia doesn't do either. It appears in the phone book under ‘Antique Dealers’ and ‘Art Galleries & Dealers’.

I didn't know how to behave in the shop. When I'm in a coin dealer, I know that nearly everything is for sale, and that anything I'm not allowed to touch will be in a protective slab or 2x2. At an art gallery, one never touches anything.

I was given a free catalog of the show. It wasn't on glossy paper but it was still nice — and something one doesn't get at coin shops. The catalog seemed like something that medal and numismatic literature collectors would want, but I've never seen a Medialia catalog in a coin book auction and the ANS library appears to lack them as well. So, the catalogs are a new offering or great rarities.

At Medialia, only a few of the items had prices. The prices seemed high to me, but the medals offered were mostly better than the $50 medals I've bought at coin shows and on eBay. I plan to go back again, and learn about art medals. The space seems to host a lot of short shows. I picked up an announcement about an opening this Saturday, but the details are not yet on the web site.
Posted by Ed Snible at 2:46 PM No comments: