I suspect several of my readers know Arthur Brand, who used to frequently post on numismatic discussion boards under the name of the ancient Greek die engraver Euainetos. Others may know of his Dutch-language book Het verboden Judas-evangelie en de schat van Carchemish (“Forbidden Gospel of Judas and the treasure of Carchemish”) which discussed a hoard of archaic Greek coins including Athenian Dekadrachms.

Brand has been working on stolen art for a while. His recent success, finding Hitler's hoard statues [dailymail.co.uk], is bringing him much-deserved fame.

Looking at the early cruciform die over time

It is a simple geometric design, and the die cutters are cutting new dies to imitate the old. In this example, the design is very similar. The lines on the right are thicker, but this will happen as the die degrades. The die on the left could have had an additional line cut and then degraded to the line on the right. I don't believe that is what happened. I believe the die on the left deteriorated into a different shape, and then a new die was made copying the old.

The die is either soft or in use for a long time and slowly degrading. The die on the left degraded into the die on the right, and they kept using it.

The die cutters are tracing and enlarging die cracks. Here we see two impressions that look dissimilar, but I believe are from the same die, and closely related in time. The ancients seem to be widening either cracks or lines they traced themselves. I don't know if this technique would stop the crack from spreading.

Fakes. There are some casts out there. There are also some coins that seem to be unrelated to the main group. It is unclear if these are from short-lived dies, are ancient counterfeits, or are modern counterfeits.

I believe the reverse die I have been studying struck some of the earliest specimens. I could be completely wrong. It could merely be of poor style and soft. But it seems to be connected to the least-degraded obverses, and obverses of the most archaic style.

One of the most common archaic Greek coin types is the gorgon/incuse type. Unfortunately very little has been written about it. Poor specimens are common. Common and ugly coin types can be overlooked, especially without a story backed by a literary source. A very rare and beautiful coin might get several papers speculating upon its origin, even if only a few are known and it had little economic significance at the time. These gorgon/incuse types, which must have played a big role in someone's economy 2500 years ago, are nearly ignored by English-language scholarship. Perhaps this is because nearly all of the 60+ specimens currently offered coin collecting sites are wretched.

In 475 BC someone buried many silver coins near Asyut in Egypt, including the coin I show above. So we know the type was circulating in 475 BC. But where? The Asyut hoard contained only one specimen mixed with coins from all over the Mediterranean. The hoard evidence for this coinage is surprisingly is slim for such a common type in the coin trade. The editors of An Inventory of Greek Coin Hoards cite just six hoards. No hoards including the type were found anywhere near Parion in Mysia, the supposed mint city given by every cataloger for the past 100 years.

Furthermore, the hoard evidence is a bit muddled because these coins come in three fabrics. The vast majority have a medium-thick flan and relatively low-relief gorgoneion with soft features. Medium-thick examples typically weigh 3.1-3.4g There is also a very thick type, with sloping sides, weighing 3.5-4.0g. Finally we have light specimens of a thin cupped fabric. For the hoards other than the one buried at Asyut we don't know which variety are being discussed. This is important because the fabric, style, and weights of the three types are so vastly different that we don't know if they are from the same period and mint.

I have attempted to do a die study of the very-thick specimens. I will post my preliminary results here soon. I have been hesitant to post, because what I am seeing is so strange, but there are so few specimens of very thick fabric examples that it seems pointless to sit on the data waiting for confirmation.

I also have a proposal for a mint city that makes a much better candidate than Parion. I had thought it was my own idea, but after much research learned it had been proposed in the early 19th century.

I have always been interested in the type but I recently had a chance to inspect the specimen from the Roland Maly collection. Maly's example looks artistically superior to most other examples. I believe it is from an early state of perhaps the first die. In upcoming posts I will attempt to show why I believe that. 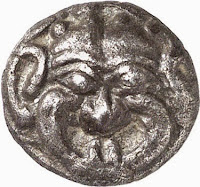 A token with strange script

Four months ago a user on the forum /r/coins posted a machine-struck token or coin with an unusual inscription.

I cannot identify the script. It seems like each letter (or syllable) is made up of one or two parts of a square plus a curve. That's unusual. It doesn't show up in any of the examples my browser can render in Wikipedias list of writing systems. Because of the lines+curve nature of the script I was thinking an alphasyllabary script or the 'Phags-pa Mongolian script. I thought it looks a little like Tamil but not really.

One side depicts what appears to be a club. The other sign shows a bird, probably a falcon, carrying something odd-shaped. The shape in the eagle's talons could just represent a rock or something but I am thinking perhaps an outline of an island or province. The style of art used to depict the bird is unusual. No coin relief, no feathers. Just a line drawing with simplified wings really. That's unusual … most coin artists like to show off by doing really detailed feathers.

I do not have the item in-hand and I don't know the size, weight, or composition.

I don't believe this is a real coin. For a while I thought it might be a fantasy coin or micro-nation. Maybe it is just designed to confuse. I am posting it here because we all love a mystery once in a while.

The Colouring, Bronzing and Patination of Metals 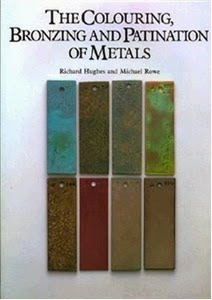 An impressive book on finishing metals is Richard Hughes and Michael Rowe's 1982 The Colouring, Bronzing, and Patination of Metals.

It's a big book. It begins with a 13 page Historical Introduction which covers metal finishing in ancient China, Greece, and Rome, throughout history up to the present day. The surface enrichment of coins is briefly mentioned. There is an extensive bibliography.

The next section is a 23 page discussion of how to actually color metal objects. This is followed by 16 color plates. The plates are quite beautiful in the 1991 Watson-Guptill edition that I borrowed from the New York Public Library. (I have not seen the other editions.)

The bulk of the book is a 250-page section of chemical recipes to get the various color effects. These are historical recipes, which the authors personally carried out “with the exception of a few potentially very hazardous recipes”. Modern chemical names are used for the ingredients. The recipes are dense, four or five to a page, arranged by the desired color of the finished product. For anyone carrying out the recipes, there is an 18 page section on Safety.

The patination technique used by Italian antiquities forgers that I mentioned in March that used Copper Sulfate, Nitric Acid, and Ammonium Choride did not appear in the book (or if it did, I missed it in the hundreds of recipes). Recipe 3.213 (the 213th recipe in the Copper section includes Copper Sulfate and Ammonium Chloride, but used Ferrous Sulfate instead of Nitric Acid. There were several recipes with Nitric acid, such as 1.40, 1.120, 2.29, and 3.132, but not many (perhaps because of its poisonous and corrosive nature). The recipes that did include Nitric Acid combined it with Copper Nitrate rather than Copper Sulfate.

It would be fun to experiment with the patina recipes, perhaps on modern copper coins, but I lack the time to embark on such a project and it probably isn't a good idea to keep such chemicals around the house. If anyone reading the blog has skill in this field and would like my to link to their site or to guest-post here on the topic of producing patinas just let me know. 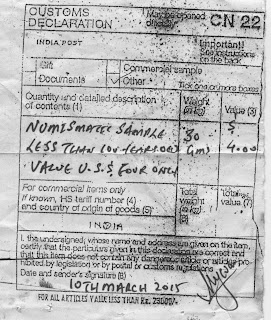 This is a completed form CN 22. It is supposed to be attached to the outside of international envelopes containing anything other than letters. This one was attached to an envelope which contained an Indian token I won for ₹220 (about US$3.46) in an eBay.in auction.

I've noticed that coins sent from India always have such a declaration. I recently received a 2013 coin from Poland of similar value which did not have a declaration. About half of the low-value coins I receive from Europe seem to lack it.

According to the US Customs web site, a customs duty must be paid for all merchandise worth above $200. (Gold coins have an exception and there is no duty on them but they still need the forms). According to cpb.gov, you must pick up goods worth more than $2,500 in person. I have never imported coins at that level.

Sellers generally don't want to attach the declarations to packages with no duty, as the declarations themselves are believed to encourage theft. If there is no Customs Duty to be paid or high-value reporting requirement it seems a pointless theft risk to affix a declaration. US Customs x-rays the envelops and will open them if it looks like duty might be needed. Yet the web site warns that the forms must be present accurate.

I was surprised to learn from cbp.gov that the weight of the item is expected. The form I show here does include it, but this is unusual in my limited experience. An this case the weight was not accurate: the token I received was about 1/3 the weight listed.