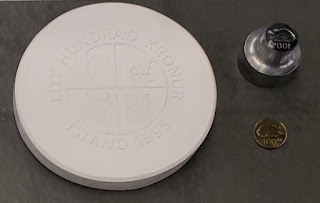 If your are interested in coins there is little to see except the Numismatic Museum. The museum is a single room in the Central Bank of Iceland building. The room is open weekdays 1pm to 4pm. It is across the street from the Harpa concert hall and borders the park with Einar Jónsson’s statue of Viking settler Ingólfur Arnarson.

The highlights are Halldór Laxness’s Nobel Prize medal and Thröstur Magnússon’s plaster design for the 100 kronur coin along with an obverse die.

There were no Viking coins on display.

Iceland’s 1930 Althing commemorative coins were on display. I had seen photos of these coins but the real ones look much more impressive than the photos.

I would have liked to purchase collector coins. (Some central banks, such as Ireland, have a retail window for collectors.) The guard at the Iceland central bank did not know about coins and the curator of the museum was on vacation at the time of my visit.

Other than the museum there is not much coin-related to do in Iceland.

Coins are still in use but I wasn’t getting many of the smallest denominations in change. At the nearby Landsbankinn bank branch I found a vending machine for coin rolls. The machine is labeled myntrullur which I believe is the Icelandic word for “coin rolls”. It seems to be a rare word — a Google search did not find a single instance. (Web searched found 20k examples of the related Norwegian word myntruller.)

I went to the Kolaportið flea market to look for obsolete coins. I found a booth stocked with stamps and banknotes but not coins. There was a booth with miscellaneous circulated coins of many countries, mostly Iceland, to pick from for a few kronur. That booth also had a single partially-filled coin album with holes for all of the coins issued by Iceland up until 1970. This album would have been an interesting numismatic souvenir but soft PVC held the coins in place and many had turned green.

Another booth at the flea market had a few uncleaned Roman coins. These were not Icelandic finds and the vendor wanted the equivalent of $30 each for them.

Many of the gift shops in Iceland have sets of obsolete coins. The coins for sale are exactly what is offered by http://www.lucky-coin.com/coins although the prices are about 3x what is listed on that site. The frustrating thing about these sets is the mixed condition of the coins. There will be nice AU-grade coins alongside cleaned G coins. It would take several sets together to make a nice set. Also, most of the holders are wrapped with soft plastic so there may be PVC concerns.

There is an Iceland Numismatic Association but they don’t meet in the summer. I also tried to contact two eBay sellers based on Reykjavic but there were out of town.

Iceland's circulating coins are nice. They depict fish. Coins aren't issued every year. Some of the coins I received in change were in great condition even though dated 2011 or even earlier.