The present study combined two datasets representing the surface topography of the two Faustina coins (Fig. 1). First, they were scanned by a 3-D color laser scanner, producing a point cloud of the surface shape. Second, they were photographed in an illumination dome with directional lighting. The two representations were combined to produce a digital elevation map (DEM) of each coin with the accuracy of the scanner and the fine detail of the photography.

Good documentary storytelling on counterfeiting: Snap Judgement recently made a 22 minute segment about Frank Bourassa, a Canadian who counterfeited a quarter of a billion US dollars in twenties in 2009.

Catalogers of high grade modern coins often boast about coins having only a few specimens, or even no specimens, known in a higher grade.

Ancient coin catalogers will sometimes say "finest known" but they rarely say things like "only a population of 43 coins better".

On NGC's slab verification pages, for example https://www.ngccoin.com/certlookup/4629247-016/NGCAncients/, there are no population reports comparable to modern coins. That page says "Total Graded by NGC: Not Available".

Yet I noticed the Heritage Auctions web now includes NGC Ancients population reports. I noticed this watching their Long Beach auction yesterday. Here is an example from a recent Heritage online-only auction: https://coins.ha.com/itm/ancients/g...m-9h-ngc-ms-5-5-3-5-test-cut/a/231836-61011.s . The auction listing displays the slabbed population with the grade of the current lot highlighted in yellow.

Here is the owl population as of September 7th 2018: 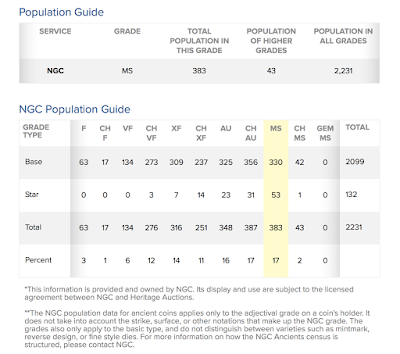 The auction house gives an NGC population report and includes the count ranked star (= "impressive"). They don't mention "fine style" or "test cut" or the x/5 ratings. This particular lot has a huge test cut that doesn't make it into the numerical chart.