In the 19th century coins were often used for engraving. They are called 'Love tokens' by collectors and there is even an eBay category for collectors of such items.

Ancient coins were sometimes modified in similar ways. They seem to be very rare, I've only found a few references to them. In the academic literature I found a short piece from Schweizer Muenzblatter vol 19 1969 p. 14, “Amulettarige Uberarbeitung eines spatromischen Follis” and a three page article in English by Brooks Emmons Levy, “Another Converted Roman Coin?” (Schweizer Munzblatter vol. 32 (1982), p. 40.

The first article features a Roman follis, the second a 30mm provincial from Antioch featuring Mên.

I would be interested in seeing pictures of similar coins, or speculation on the why this was done. It strikes me that the few examples I've found come from very different times and places, but have similar grooves. This could be because grooves are the easiest thing to cut, so everyone who mutilates a coin naturally does grooves.

FORVM attributed my coin as being from the Amphipolis mint. I don't know much about Alexander bronzes, does anyone know if this is correct? What is the diagnostic?
Posted by Ed Snible at 4:16 PM 2 comments:

Someone has made an animated slide show of Greek Coin replica dies made by Peter Rosa. The video is set to some classical music that I don't recognize.

The Book Ripper Project, bkrpr.org, has plans and software for a book scanner that costs $250 to build. With a human turning the pages it can scan 600 pages an hour.

The $250 cost is mostly two digital cameras, which you can also use for anything else you want.

(via TeleRead)
Posted by Ed Snible at 2:40 PM No comments:

Looks like some good stuff. Lot 1043 is Price's The Coinage in the Name of Alexander the Great and Philip Arrhidaeus estimated at 225 euros.

I haven't bought coins from Mr. Jacquier but I have bought numismatic books and had no problems.
Posted by Ed Snible at 3:19 PM No comments:

Founding Meeting in Glasgow
A new international network of scientific numismatic libraries is about to be establishing the International Numismatic Libraries Network (INLN). Its aims will be to coordinate common efforts (for ex. in developing cataloguing standards) and quite generally to distribute and to exchange informations.

The INLN includes already 25 numismatic libraries world-wide and will be founded formally at the International Numismatic Congress in Glasgow (2nd and 3rd September 2009).

... If you take public money to buy art, you should make that art available to the public using the best, most efficient means possible. If you believe the public wants to subsidize the creation of commercial art-books, then get out of the art-gallery business, start a publisher and hit the government up for some free tax-money.

The announcement says that the site had planned to launch later in the year, but “hurried a bit” to launch this week.

I wish them the best of luck! The site is visually pleasing. Unlike CoinArchives, if there are more than 1000 results it is possible to view them all. Unfortunately, acsearch.info only shows 20 coins per pages meaning a lot of clicking and scrolling when dealing with large query responses.

Lars and Simon's previous site was romanatic.com. It will be interesting to see if they have any kind of cross-linking planned for the two sites. Currently Romanatic lets users search WildWinds and CoinArchives, and I'd expect an acsearch.info link can't be far away. It will be more interesting to see if they can come up with a way to automatically generate links from acsearch.info results to scholarly information on Romanatic.
Posted by Ed Snible at 8:56 PM No comments:

CoinArchives.com to become a pay site 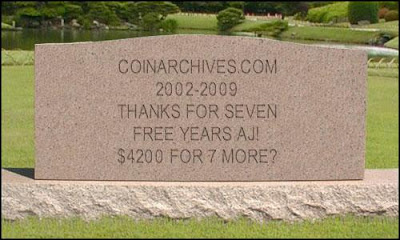 The great research tool, CoinArchives.com has removed 93% of it's content. A new pay site, CoinArchives Pro, will offer the old content. The new site has a $600/year subscription fee.

$600/year is a lot to host other peoples images and offer text searching over other people's text. I hope that the new venture is so successful that it inspires many imitators to offer better content at lower prices. (Meaning I lack the ability to explain to my wife where $600 goes every year, but maybe someone else will sell me access to old catalogs for $30/year).

CoinArchives Pro access might be worth this kind of money. We are talking 750,000 coin records. Compare to a full set of BMC Greek that costs $3000 and has only about 30,000 coins. I'm not saying CoinArchives Pro isn't worth $6000 for a decade of access, just that it will be tight budget-wise for me to find the money.

I wonder if the glossy catalog dealers, who produce catalogs at a loss for their customers, will see a jump in subscriptions because of this move?
Posted by Ed Snible at 5:41 PM 6 comments:

ISEGRIM is back at a new location, http://isegrim.dasr.de/isegrim/anmelden.html.

For those who have never seen it, ISEGRIM is a complicated search engine over ancient coins from Asia Minor in the world's collections. It has no pictures. It can be cryptic to use because of it's 1980s-style text-based query language that uses German abbreviations. FORVM user Archivum has written a user's guide. The format is similar to Otfried von Vacano's Typenkatalog der antiken Münzen Kleinasiens (1986).

His personal web site allows download of Matlab extensions that implement his techniques and a technical report on how to use it.

I wrote to Dr. van der Maaten who provided me with an paper, “A New System for the Classification of Modern and Historical Coins”. The historical coin portion of the paper discusses an experiment using 4822 Merovingen coins from the Dutch Money and Bank Museum (AKA The Netherlands Mint Museum or Het Nederlands Muntmuseum.) The researchers (van der Maaten, Paul Boon, and Eric Postma) trained their computer using the Merovingen coins and then fed 50 different Merovingen coins into the system. The goal was to find coins “perceptually similar” in the training database. The image above is taken from that paper (and modified by me to show a single row of pairs.)

So, rather than trying to identify the ruler or inscription, the task was to find coins that looked similar in the opinion of 10 non-numismatist humans. The paper reports that the computer got 20% right "magnitude", 43% right "orientation". I think orientation was figuring out how to orient the coin (right-side-up) but I am not certain.

The research was supported by NOW/CATCH, a Netherlands program to develop innovative tools for accessing cultural heritage.

In a personal email, Dr. van der Maaten reported that in a database of 4000 Roman coins the computer got a good match for 50% of the queries. I assume the criterion are similar, a match that looks perceptually similar to non-numismatists, such as a similar imperial portrait facing in the same direction. The Roman database used in the experiments is online, RICH: Reading Images for the Cultural Heritage. (I was previously unaware of this database and encourage Roman coin collectors to try it out and send me their thoughts in the collection, and its presentation and web interface.)

A success rate of 20% to 50% doesn't sound great but it is pretty impressive! As with the COINS results discussed on this blog, I am curious to see if statistical problems boosted the success rate. Most Roman coins feature a man's head facing right on their obverses. A system that classified EVERY image as a man facing right might be rated as 25% success by non-experts. I look forward to the publication of the Roman results in detail.

An image and 38 second video of the Roman coin recognition can be seen here. It is either a silent movie or my PC doesn't have the right version of Quicktime to play the sound.

Greek and Roman Coins from the du Chastel Collection 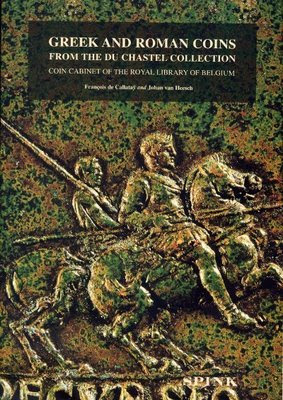 I recently won a copy of Greek and Roman Coins from the du Chastel Collection (Callataÿ & Heesch, Spink: London, 1999). Originally published at £60.00, it's now remaindered for £20 (about $33) from Spink. I got mine on eBay from Charles Davis who still starts auctions below wholesale.

It's a well-researched and well-made catalog of mostly Greek coins. The 41 plates are great. The 819 coins, collected by count du Chastel are all exceptional. Unfortunately in numismatic publishing, mere quality does not translate into sales. It's hard to compete with free color dealer catalogs. The best book in a category, such as Roman Republican Coinage (still in print at $490!) or Roman Provincial Coinage can move copies at high prices, while the second-best book doesn't move at all unless heavily discounted.

du Chastel is great but it's best feature is the superb dust jacket. The dust jacket photograph, by Stephen Sack, is the best I've ever seen on a coin catalog. It's an extreme closeup of the reverse of a sestertius of Nero, featuring the emperor on horseback. Sack manages to get an 8” picture out of the center of a 35mm coin that looks like an artistic masterpiece of detail and patina and light. 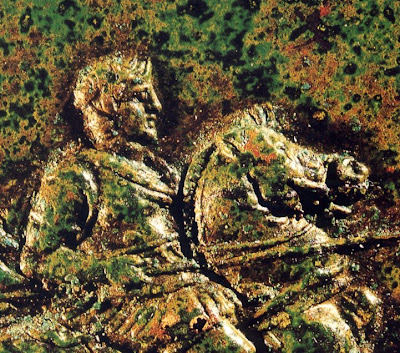 The image isn't photoshopped. My understanding is that he spent months looking at hundreds of worn bronzes with interesting patinas under a microscope looking for the textures and images that eventually make it into his work.

Sack had a show of his fine-art coin photography at the British Museum. The catalog, Metal Mirror: Coin Photographs by Stephen Sack

is mind-blowing. Although I missed the London premiere I saw the pieces at Ariel Meyerowitz Gallery in New York. Very impressive.

I believe the Ariel Meyerowitz Gallery is gone but a few of Sacks' coin works can are available on VCoins, like this peacock and this goddess.

I can't afford a €4,000.00 picture of a peacock no matter how much I might want it, though. I bought a second copy of the catalog intending to dismember it and mount several images in 8x10 frames. I couldn't bring myself to take the blade to the duplicate catalog, though!
Posted by Ed Snible at 10:00 PM 1 comment: