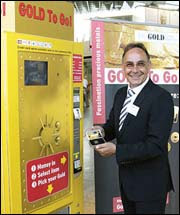 ... Germans will soon be able to sate their appetite for the yellow metal as easily as buying a chocolate bar after plans were announced on Tuesday to install gold vending machines in airports and railway stations across the country.

A prototype vending machine on display in Frankfurt Airport on Tuesday appeared to be a converted version of the dispensers typically used to sell snacks. For €30 airport shoppers could buy a 1g wafer of gold, with a larger 10g bar priced on Tuesday at €245 and gold coins also on sale.

When the Financial Times bought the cheapest product it was dispensed in an oblong metal box labelled “My Golden Treasure”, with a certificate of authenticity signed by Mr. Geissler but no receipt and the wrong change. Mr. Geissler said he hoped to have a more advanced prototype available this month.

This book attempts to publish a catalog of all Greek coins ordered by types. This makes it a useful work for identifying coins of unknown cities, especially those lacking inscriptions. 150 plates!

The work is similar to Richard Plant's Greek Coin Types and their Identification but it uses photos rather than drawings, doesn't illustrate all types, and doesn't index animal or god types.
Posted by Ed Snible at 8:03 PM No comments:

Fakes of US coins getting better?

Today, excellent copies of U.S. Trade dollars and Flowing Hair dollars have been reported. From what I have seen, a "second generation" of these fakes is very deceptive.

While most Chinese counterfeits, such as the Morgan dollar illustrated here, will not pass inspection by a knowledgeable numismatist, those fakes often do. This is especially true when their surfaces are chemically altered or cleaned to simulate age. 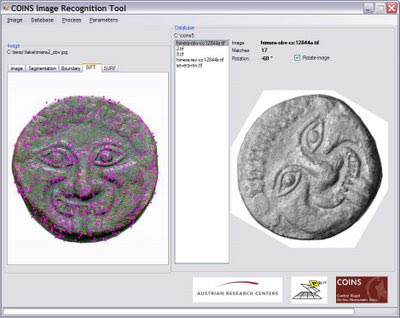 I've written before about The COINS Project (Combat On-Line Illegal Numismatic Sales), a European Union sponsored effort “to enable the traceability of cultural heritage objects”. The project is developing “technologies aimed at allowing permanent identification and traceability of coins”.

The key pieces are the Image Recognition Tool, said to be able to match a photograph against a database of coins, and the Shape Matching Package, which is apparently also for matching photos.

There is also a a web spider “to discover and identify stolen coins illegally sold on the internet” based on the open-source search engine Nutch. The spider comes with source code. It should robotically download all image files on a site and compare them against the database of coins. (My first reading of the search code did not impress me. I found code that looks for pages containing the word 'coin' or 'moneta' but I didn't find code to invoke image processing.) There is a user interface, which can be previewed here, for conducting simple searches of a coin database. For example, enter 'Alexander' in the simple query box, or 'eagle' in the iconographic query box. This Flash-based web interface is nothing special, and the spider's ability to search for stolen coins is only as effective as the photo-matching capabilities powering it.

A good image recognizer for ancient coins would be quite useful. It probably wouldn't help much to find particular categories of cultural property, such as ancient Cypriot and Chinese coins, as these are usually sold with descriptive text making photo recognition superfluous. Recognition technology would be useful to detectives for particular stolen coins and for computer-assisted die studies by numismatists.

I downloaded COINS' Image Recognition Tool (IRT) and loaded it with a database of 80 fake coins from my own photo-file. Although the IRT can compare images in popular formats such as JPEG the database only accepts greyscale TIFF files. I used Pierre Gougelet's free XnView to convert color JPEG files to greyscale TIFF.

I queried IRT using a fake image that wasn't in the database. I chose a cast fake Himera bronze, a type which gets past many dealers despite having been published as false in Wayne Sayles' Classical Deception. I had several of fakes from the same forger's mold in my database. The software coughed up five possible matches, with the highest being another coin of this type! (The other offered matches made little sense and were ranked poorly by the software.)

That seems like impressive performance. However, my database is small. Only 43 coins, or about half of the 80 coin database, correctly segmented as round. The other half of samples weren't exacted from the patterned background. Backgrounds that a human wouldn't even see, such as a finger, are not detected as expected by IRT. 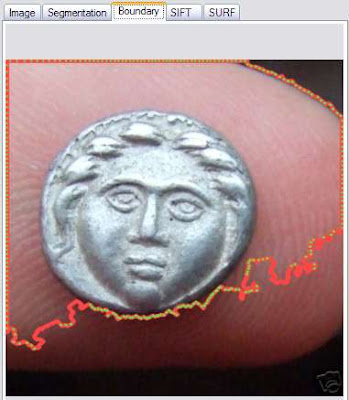 The 4 non-zero matches returned in my first try represent 10% of the 43 coins whose edges were detected. Obviously a matcher that thinks 10% of the database matches a particular specimen is not yet trustworthy enough to assist law enforcement. Furthermore, the coin I first checked is a cast fake, so the geometry of the edge should help the software to detect matches more easily.

Oddly, the edge geometry didn't play a role. Although the correct match was found, the system believed a 60 degree rotation was needed. Actually the coins had the same orientation! (The picture at the top of this post is of this match.)

I tried genuine coins of different types than the fakes and got many false positives. The strength of the match is reported by IRT in the 'Matches' field. The two identical casts got 17 matches; a Ptolemaic bronze got 8 matches a shipping envelop with an eBay logo. I don't know what number is considered by the COINS scientists to be a good match.

I've just started playing with this software. I will try the Shape Matching Package next and report here on its accuracy. I invite other collectors experimenting with this software leave a comment on this post describing your success or failure matching coins using COINS' tools.
Posted by Ed Snible at 9:30 PM 4 comments: 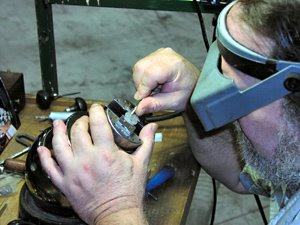 American engraver Ron Landis is well known in hobo nickel circles but his replicas of ancient coins have attracted little attention. I could not find his Athenian dekadrachm replica in Fischer-Bossert's The Athenian Decadrachm

Landis engraved dies for Athenian dekadrachms, tetradrachms, and didrachms. According to Dr. Lawrence J. Lee World Coins & Medals, Landis' company Gallery Mint Museum minted quantities “in the upper hundreds” (I believe in 2000). In 2007 Lee's company restruck “no more than 100 of any denomination”.

The Gallery Mint Museum closed in 2005. Photos of Landis and the manufacturing equipment can be seen at Arkansas Road Stories.

Ron Landis apparently described his engraving technique in “Hand engraving and die sinking”, published by the ANS in Coinage of the Americas Conference: The medal in America (vol. 2, 1997). (Has anyone seen this? I do not have a copy.) 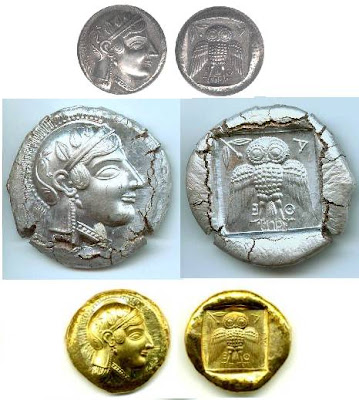 UPDATE: Dr. Wolfgang Fischer-Bossert wrote to remind us that his book does not include fantasies that are neither dangerous nor meant to deceive.
Posted by Ed Snible at 3:57 PM No comments: