Issue 13 of Robert Matthews' Counterfeit Coin Newsletter is available on his web site. It includes short coverage of a 2009 'hoard' of late Roman bronze, then ten most expensive counterfeits authenticated by PCGS, Turkish tourist fakes, and as usual coverage of fake UK 1 pound coins.

(There is also a nice photo of an ornamental vase made of old coins the author saw on holiday in the Ukraine.)

Newton and the Counterfeiter is briefly reviewed, as well as scientific papers on "Using the optical mouse sensor as a two-euro counterfeit coin detector" and "Laser and electron beams physical analysis applied to the comparison between two silver tetradrachm Greek coins".
Posted by Ed Snible at 9:29 AM 4 comments: 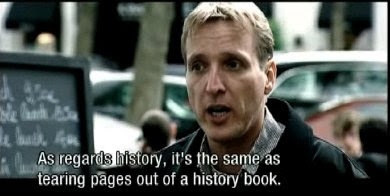 Blood Antiquities is a 47 minute documentary on antiquities smuggling. No coins so far (I haven't watch the whole thing.)

At 2:24 and 9:00 we see video of Arthur Brand, who sometimes posts under the alias 'Euainetos', and whom many people used to believe was a false identify of Michel van Rijn

The filmmakers show antiquities dealers in Belgium filmed both with and without hidden cameras. There are also a lot of village and museum footage from Afghanistan.
Posted by Ed Snible at 2:27 PM No comments:

Here we have bronze coin of Pyrrhos of Epiros depicting a Macedonian shield with Phyrrhos' monogram. (This coin is not in my collections).

On the right is the description of the coin from Barclay Head's Historia Numorum, p. 230. The description shows the Greek inscription ΠΥΡ (Pyr) with a line over it.

What does this line mean, and how should it be encoded for web pages?

When I converted the Historia Numorum to HTML I rendered the line using inline CSS with an 'overline' text decoration:
It is also possible to render such text using the Unicode 'combining overline', U+0305. Here are two examples:The first format, using a CSS style, looks great in browsers but when the text is selected and copied to Notepad it loses the overline. The second format, using a Unicode combining character, looks terrible on Firefox/WinXP, but can be copied to Windows Notepad with the overline intact.

Until recently I thought the overline indicated a monogram, but Bradley Hudson McLean (An Introduction to Greek Epigraphy, p. 56) explains that the line is an 'abbreviation mark' or 'abbreviation sign' indicating that not all letters are present. This convention was used by engravers and also medieval copyists.

McLean also has a short description of ligatures on page 55, and his examples are the same as some two-letter symbols for magistrates that I have been calling 'monograms'. Usually when we think of ligatures today we think of printers combining ff or ffi for legibility but McLean also mentions the Roman practice of putting one letter on the other, called 'compendia'.

An example of a compendia on a coin is the OV-ligature on this coin of Nikopolis ad Istrum, right before the 12 o'clock position. I don't know of a good way to render compendia in HTML.
Posted by Ed Snible at 8:21 PM 1 comment: