Jean Elsen list 243 is online and includes 315 ancients and over 500 medieval coins. Also offered are nearly 200 numismatic books which were not included in the printed catalog.
Posted by Ed Snible at 12:20 PM No comments:

Copyright law should distinguish between commercial and cultural uses

Cory Doctorow proposes in today's Guardian Unlimited that “Copyright law should distinguish between commercial and cultural uses”.
Posted by Ed Snible at 3:22 PM No comments:

e-Book on counterfeits by Prokopov 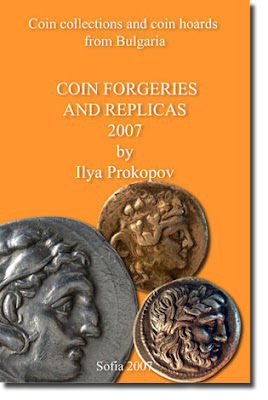 Ilya Prokopov's new book, Coin Forgeries and Replicas 2007, is only available as an e-Book.

This book is as good, or better, than previous books in the series. The other books cost $20 plus $8 in postage. The e-Book is only $9. The publisher is SP-P & Provias.

After purchasing the book (with Paypal), an email arrives with a one-time URL. The buyer is expected to use the browser to save the URL rather than opening it. This produces a 48MB .PDF file. There is no troublesome DRM on this file. You should have no problem printing the book or copying it to a CD-ROM. Obviously, please don't make copies for your friends — $9 is a pretty good price for Dr. Prokopov's hard work. This is an eighty page book!

The book coversIn most, but not all cases, the coins are high-resolution and easy to see. There are a few nice blow-ups. Unfortunately, a few coins only have tiny, low-resolution images. It is explained that these were made “under urgent conditions”. Dr. Prokopov is documenting a criminal enterprise and sometimes it is difficult to get the criminals to cooperate!

For many of the coins Prokopov identifies the forgery “studio”. If he knows he describes the manufacture and patinating process used by the forger. There is a lot of interesting stuff here, much of which was new to me. I found a group of Roman Republican fakes the most interesting. The forger made porous casts then partially silver plated them. From a distance, it looks a lot like genuine “crystalization”.

Prokopov's English is easily readible. There are a few minor spelling errors and unexpected word choices. These minor defects are not important. This is an important work and highly recommended.
Posted by Ed Snible at 7:49 PM No comments:

Charles Davis will be auctioning duplicates from the American Numismatic Society Febuary 2nd. 682 lots, including 342 lots of works on ancient coins. A PDF of the printed catalog is online.

The printed catalogs arrived a few weeks ago. Charles Davis doesn't send email notices or post to mailing lists and if I hadn't gotten a printed catalog I wouldn't have noticed the sale.
Posted by Ed Snible at 9:30 AM No comments:

Dritto, a symbol for 'Obverse'

He includes the symbol that resembles the Prescription sign, ℞, which he considers Italian and English. His symbol has a wild look: the crossbar is curved and nearly as big as the R.

Gnecchi also includes a symbol I haven't seen before, resembling a D with a large tilde through it, which he defines as 'Dritto'.

I have never encountered this Dritto symbol. However, I don't read Italian books on numismatics. If you have seen this symbol elsewhere, please post a comment.
Posted by Ed Snible at 10:40 PM No comments:

From the mutiny.in blog, The Zero Rupee Note.
Posted by Ed Snible at 8:28 PM No comments:

DRM, or Digital Rights Management, is technologies that allow publishers to control how video and e-books are used. For example, publishers can assign passwords, or prevent printing, or prevent copying paragraphs to the clipboard for pasting into book reports.

DRM is bad for purchasers because it is complex and error-prone. Publishers say it is a good deal from consumers, claiming the restriction prevents pirates from bootlegging copies, thus allowing the publishers to sell for lower prices. As e-books and song downloads cost nearly as much as buying hardcovers and CDs, this claim seems dubious.

With DRM, you effectively have the material but the ability to read it is stored online. One of the biggest dangers of DRM is that problems with the publisher will lock you out of media you've paid for! This happened recently when Major League Baseball cut off access for fans who had bought videos of baseball games.

Almost no one likes DRM. So it was surprising to see Kevin Barry and Zachary 'Beast' Beasley promoting it in their January 2008 Celator column, The Internet Connection. They write “We firmly believe that authors and publishers should be paid for their efforts, and DRM is particularly important for niche markets such as ancient coin reference books.”

There is a bit of irony here. The Celator doesn't pay. I doubt Barry and Beasley got paid to write that authors should be paid. Barry and Beasley write about the Internet, a medium where almost no one gets paid.

Most numismatic books lose money. Folks mostly write because they love to share their knowledge. It would be great if writers got paid more than, say, coin dealers. This doesn't happen. Making it harder to buy an e-book hurts writers.

The ANS library is worth a visit. They have 18th century numismatic books in open stacks. I have looked at these books. They still work. I don't get an error opening up an Eckhel or Mionnet tome because the publisher is out-of-business and my password didn't handle Y2k, or Y1800, or Latin becomming a dead language. If numismatic books get DRM-ed, then book buyers will get screwed just like baseball fans.

I'm not saying this because I'm a pirate. I don't copy books that are in-print, and I try hard to avoid copying out-of-print books. I prefer books to coins, and returned from the NY International show without any new coins but with three new books. I'm saying this as a friend. Avoid DRM.

I did purchase a DRM-ed numismatic book once, Barclay Head's BMC Ionia. Even though I paid, and had a password, my computer wasn't compatible. I downloaded a free program to bypass the DRM. I had to waste a lot of time. The 'publisher' didn't send a cent to Barclay Head. Not because he's been dead for 90 years, but because the book is in the public domain.

Barry and Beasley don't mention numismatic e-books, except to say Spink has no plans to publish any. A title that looks interesting is from Krause — 2008 Standard Catalog of World Coins 3 DVD Set. This is the Krause books 1801-1900, 1901-2000 and 2001-Present. I saw the box at the Krause booth at the NY International show last week but haven't used the product or seen it demonstrated. George Cuhaj confirmed the illustrations are black and white.
Posted by Ed Snible at 10:27 PM 1 comment:

The catalog for the Gerhard Hirsch Nachfolger auction arrived today. It's also online. 700+ ancient coins, plus many antiquities, medieval, and modern coins.
Posted by Ed Snible at 7:01 PM No comments:

The Kansas City Star has an article about counterfeit $100 bills. It features a great picture of four 'craftworkers' examining an enlargement of the bill.
Posted by Ed Snible at 8:00 AM No comments:

I saw a demonstration of MA-Shops at NYINC today. It is a European competitor to VCoins. Supposedly there are 120,000 items for sale on it already. I see 1350 ancient Greek coins, 3082 Romans, and 213 Byzantine. 922 Medieval. A lot of modern coins, especially German. About 500 numismatic books.

I like MA-Shops' ability to view by category. I think that's better than VCoins, which has per-store categories but no overall. The downside of MA-Shops is the search functions. It doesn't support wildcard searching (*). It doesn't support automatic synonym searching. Those features what makes VCoins great, and they are needed even more on MA-Shops because a lot of the descriptive text on the site isn't in English. This means a lot of searching for the same term in various languages.
Posted by Ed Snible at 4:49 PM 2 comments:

Last July's issue of The Celator contains an editorial from Kerry Wetterstrom. Kerry has decided he can no longer accept articles that reference Wikipedia.

Kerry won't accept articles citing Wikipedia because 1) “trolls” are creating deliberate falsehoods in it, 2) Universities are banning the site and 3) An excellent Celator submission had errors in rulers dates and the source was Wikipedia.

I was working on a long rant against Kerry's policy, but instead of posting it I went to Wikipedia and updated the entry for Polyxenios and pointed out a problem with a Bopearachchi citation on the discussion page for Menander I.

I wish Kerry's editorial told us the names of the rulers with incorrect dates. I am currently interested in Polyxenios, but it probably wasn't him! Kerry's advice for getting information that is good enough for The Celator is to “... visit your local library, as they usually have the basic historical references.”

The only (modern) book I have that mentions Polyxenios is Sylloge Nummorum Graecorum: American Numismatic Society, part 9, Graeco-Bactrian and Indo-Greek Coins (1998) which places him circa 100 BC, presumably based merely on his coin sharing monograms with slighly less dubious Baktrian dynasts. Bopearachchi doesn't mention that R.C. Senior disagrees with him. I don't have Senior's books and don't know if he says why he disagrees with Bopearachchi.

Errors in regnal dates don't bother me. A good article on Polyxenious' coinage would still be good if the author followed Mr. Bopearachchi, Mr. Senior, or reported the disagreement when dating the coins. Kerry should re-consider. However, authors should also consider that citing Wikipedia makes them look kinda dumb. It is better to obtain the books and articles cited in the ===References=== section of the Wikipedia article and see what the experts actually said!
Posted by Ed Snible at 10:35 PM 3 comments: