I had been previously unfamiliar with the Spesmilo symbol. It apparently was only used on a single 'coin', a 1912 fantasy issue of the Esperanto congress. (The NGC web site lists examples in MS60 and XF40). According to Wikipedia the coin was used before the first world war by a few British and Swiss banks

The denomination was planned to equal 0.8g of 22k gold, or about 1/2 a US dollar, 2 shillings in Britain, or one Russian Ruble. It was supposed to be worth 1000 spesmiloj. The denomination is obsolete: Esperanto fantasies struck after 1945 are based on the imaginary Stelo system, not the Spesmilo.

On the Mac if I try to enter the Spesmilo sign I do NOT see the expected Sm abbreviation. Instead I see a P with a line through it. I have pasted it here: ₷. I have no idea what you will see. It is supposed to look like this:

The P with a line through it is the new currency symbol for the Russian Ruble. Microsoft has apparently rolled out support for the new Symbol in Windows. The Mac, at least mine running 10.8.5, has placed that glyph at the code point for the Spesmilo sign ... a denomination equal to one ruble.

According to a blog post by Brian Krebs, a counterfeiter (or middleman) who goes by the alias MrMouse is selling high quality US notes at 45% of face value, payable in BitCoin.

MrMouse says his single-ply bills do not have magnetic ink, and so they won’t pass machines designed to look for the presence of this feature. However, this fraudster claims his $100 bill includes most of the other security features that store clerks and cashiers will look for to detect funny money, including the watermark, the pen test, and the security strip.

In addition, MrMouse says his notes include “microprinting,” tiny lettering that can only be seen under magnification (“USA 100″ is repeated within the number 100 in the lower left corner, and “The United States of America” appears as a line in the left lapel of Franklin’s coat). The sourdough vendor also claims his hundreds sport “color-shifting ink,” ...

I had no trouble finding the actual ads using search keywords mrmouse counterfeit. 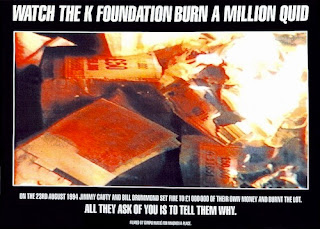 Early in the morning of 23 August 1994, in an abandoned boathouse on the Scottish island of Jura, Bill Drummond and Jimmy Cauty burned £1,000,000 pounds. It was the majority of the fortune they had earned in their brief career as pop stars (their band was The KLF).

This Saturday will be the 20th anniversary.

You can watch the burning on YouTube. There is also a television interview. A book on the burning, K Foundation Burn a Million Quid (1997) is available on Amazon for $10

Do the coins of Antiochos IV depict the Medusa Rondanini?

The Seleukid emperor Antiochos IV, who ruled from 175 BC until his death in 164 BC, gave the Athenians a golden aegis with the Gorgon upon it. Presumably Pausanias, who lived in the 2nd century AD, actually saw the aegis at the theater in Athens.

What did the golden aegis look like? Antiochos IV actually had some of his bronze and small silver coins minted in Antioch depicting an aegis, perhaps the very aegis that Pausanias would see three centuries later.

The most famous Medusa from ancient times is the Medusa Rondanini. The marble Rondanini sculpture is an important piece of Cultural Property in Italy, and has been depicted occasionally on their currency such as the 1948 1000 lire note.

Janer Danforth Belson has suggested the Medusa Rondanini is a copy of the aegis Antiochos IV gave the Athenians. Belson believes “Classicizing features for the gorgoneion would have been chosen intentionally as an artistic tribute to the sculptural stype of Pheidias and his chryselephantine creation.” Belforth says “… the gorgoneion shown on this coin has many of the same iconographic features of the Medusa Rondanini rather than the usual round faces of the ‘grotesque’ type.”

If Antiochos IV's coins depict the Rondinini (or it's original) as Edward Newell first suggested in 1918, then Antiochos IV's aegis coin reverse provides an important contemporary reference confirming Belson's theory. Does the coin match? (Scroll back and compare them). I would say not much. It is possible the Rondinini only copies the center gorgoneion of the Athenian's aegis. Unfortunately the bronze coins are not detailed enough to make a positive identification. Antiochos also issued small silver coins depicting an aegis, but they are so small the gorgoneion is only a few millimeters across.

An even rarer coin type of Antiochos IV's depicts a side-facing winged head usually described as Medusa. I wondered if it could possibly depict the same sculpture.

First I had to find a side-view of the Medusa Rondinini. I had a hard time! Nothing on the regular internet shows the Rondinini from the side. I finally found the side view in Adolf Furtwängler's 1895 book Masterpieces of Greek Sculpture. I have placed it beside an image of the coin from the 2009 catalog by Münzen & Medaillen of the Roland Müller collection. The coin is rotated and scaled to match Furtwängler's picture. 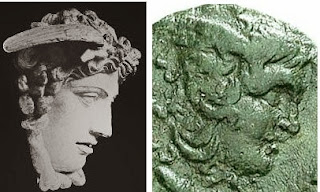 I believe there is quite a resemblance!

Arthur Houghton and Catherine Lorber suggest the side-facing Medusa coins were struck at Antiochos IV's mint in Mallos. They connect Medusa iconography with later tetradrachms of Mallos that depict Athena with an aegis draped over her shoulders and back. This is possible, but I prefer connecting Medusa iconography with the forward facing aegis struck at the Antioch mint.

And with the Medusa Rondinini.

Many of you use Wildwinds.com, a web site cataloging ancient coins built in 2000 by Dave Surber.