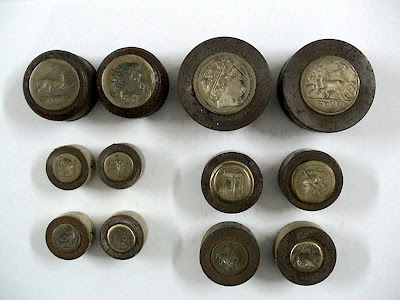 FORVM user Taras has posted a description of two 2004 seizures of counterfeit ancient coins and forgers dies in Italy. I was surprised the seizures included 870 counterfeit dies but only 371 fake coins. The post is worth reading for Taras' speculation on this workshop's methods.
Posted by Ed Snible at 7:45 PM No comments:

Lost World of the Golden King

It's good! Holt retraces the development of Baktrian numismatics from the tetradrachm of Eukratides published in 1738 by Theophilus Siegfried Bayer to the present day. Holt's narrative is not a dry scholarly recap; he includes many stories including new research about the arrival of Eukratides' giant ancient coin on the European market.

This is a good approach. So little is known about ancient Baktria that there is no real story to tell. The second major idea of Lost World is a reminder of how much that we think we know about Hellenistic Baktria is now-discredited speculation. Holt's book will hopefully serve as a great "reboot" for the field of Baktrian studies.

Holt is critical of numismatic scholarship for continuing to focus the role coins play to uncover the ancient kings and battles. He believes that numismatics should move on, devising ways to deduce facts about ancient lifestyles. Statistical techniques are used to show technical errors on coins imply the coiners of ancient Ai Khanoum were probably stressed out as their civilization was dying.

The professor's critique of numismatic scholarship has some merit but he seems to paint numismatics with a single brush. So much of coin studies are done by or for collectors; it seems unfair to criticize the entire field for continuing to focus on kings.

Career academics probably do not need Holt's insights to revitalize the study of coins but perhaps collectors can consider forming interesting collections around topics other than lists of kings. People are starting to collect overstrikes. I know one advanced collector who has moved on to collecting coins made into tools and decorations in antiquity.

Recommended. Lost World of the Golden King: In Search of Ancient Afghanistan (Hellenistic Culture and Society) 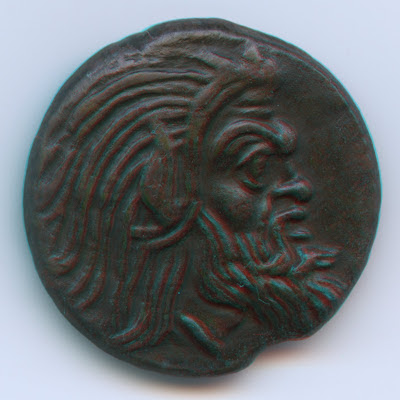 To view this 4th or 3rd century BC head of Pan properly red/bluegreen 3D glasses should be used. Click to view at full resolution.

This image was created using two scans on a flatbed scanner and Photoshop. Gimp can also be used. This is my first attempt at Anaglyph 3D coin photography. For the technique I credit Gerald Marks. Yesterday I attended a workshop conducted by Professor Marks at Observatory in Brooklyn. 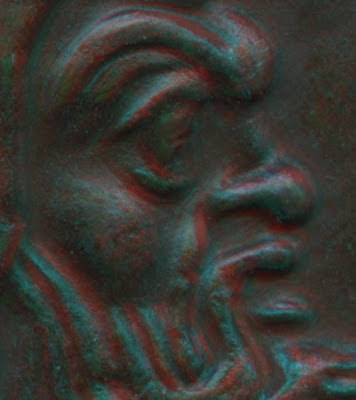