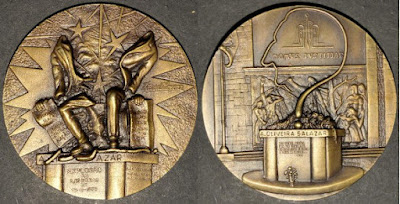 The obverse of this medal depicts the bronze statue of former dictator António de Oliveira Salazar of Portugal. The statue was beheaded with dynamite during the 1974 “Carnation Revolution”. The revolution, a military-led coup d'état, started on April 25, 1974, and replaced the dictatorship with a democracy after a two-year transitional period.

The statue’s head has been stored for over 30 years in the attic of City Hall in Salazar’s city of birth, Santa Comba Dao, Portugal. There is current discussion that the statue be restored and placed in a newly planned Salazar museum.