Imitations of the bronze coinage of Pontos

Some time around 95 BC Mithridates the Great ordered a massive emission of bronze coins depicting on aegis of Athena with the Medusa's head at the center to be struck at seven of his mints in ancient Pontus on the Southern coast of the Black Sea.

The obverses of these coins depict a gorgon with flowing human hair, lips somewhat frowning, collar, within aegis of six to nine sides, aegis tied at corners, aegis edges sometimes dotted. The reverse names a city and shows Nike, wearing chiton with robe, advancing right; a palm branch held in both hands resting on her shoulder.

These coins must have been minted in massive quantities. They appear in many collections and are often sold inexpensively at auction.

In addition to the products naming the seven official mints we sometimes see crude examples with blundered inscriptions.

In this case the AMI of Amisos has been cut to resemble a W, and the ΣOY is reduced to Σ·. I have not been able to find scholarly literature in the imitations. Michael Mitchiner calls these imitations “Sarmatian”, perhaps because of the fint spot or because Mithridates was allied with those tribes and could have authorized the issue. The Sarmartians were a people who lived in western Scythia along the north cost of the Black Sea from the mouth of the Danube.

The crude issues seem to come scattered and mixed in hoards of mostly official style issues. In published hoards they don't seem to be distinguished. Commercial dealers seem to acquire the crude examples with the good examples. Sometimes it can be difficult to tell an official-stye issue from an imitation, so it can be difficult to be sure how big an issue the crude mints supplied.

Because the crude types are mixed together with the official style, it suggests merchants accepted them evenly with Mithridates own coinage. Why? One possibility is that the crude type represents an eighth official mint. Mithridates controlled Scythian territory on the Northern coast of the Black Sea, in present-day Russia and Ukraine. He had a Scythian wife, Hypsicratea. There is no reason why he couldn't have taken over or set up a mint in Scythia.

About three-fourths of the official-style aegis/Nike coins that I see on the market have an Amisos inscription. (Michel Amandry found 72% in a hoard of 409 specimens he published.) Perhaps the crude issues copied the ΑΜΙ-ΣΟΥ of Amisos on purpose, or had only a few coins for a model. I wondered about this for a long time and then I found a specimen that seems to have a poorly-drawn aegis and poor version of the ΑΜΑΣ-ΤΡΕΩΝ inscription of Amastris: 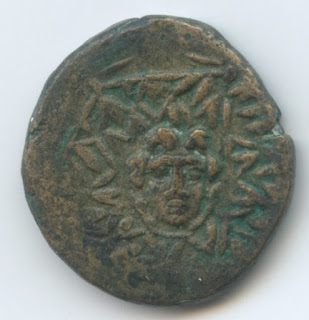 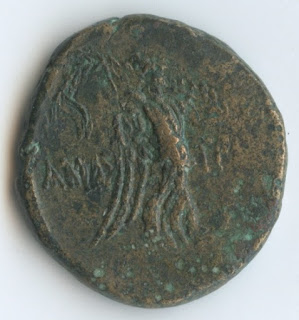 It is possible a die cutter at a Southern Black Sea mint in Pontos or Paphlagonia was having a bad day and struggled with the aegis and the inscriptions. I suspect instead a Northern Black Sea imitation with style good enough that I can never be certain.

Why was the only the aegis/Nike type imitated? Mithradates had many common copper-alloy coin types. Besides the type we have been discussing there were large bronzes of Athena head/Perseus, large Perseus/Pegasos bronzes, Zeus/eagle, Dionysos/cista, Ares/sword, “Head in leather cap”, and Artemis/tripod. (The mythological figures are all identified by style; there is no certainty that Nike, Ares and Artemis are the correct identification.) Yet the crude examples are always aegis/Nike.

One possibility is the alloy. Mithradates seems to have used different alloys to color his bronze denominations differently. Perhaps one was easier or more profitable for the unofficial mint or mints to strike.

Another possibility is that the aegis/Nike type had special appeal for the unofficial mint. Michael Mitchiner thought it was a “Sarmatian” tribe that issued them. This tribe was named after lizards (sauros). Perhaps the snakes of Medusa were considered kin to sauros.

However, I recently purchased a bronze coin of Amisos from this period that seems to be in an odd style and is not an aegis/Nike.