Kushano-Sasanian coins are kind of interesting

When I started this blog I had hoped to write about computers and ancient coins, but those posts seem to attract little interest. In the past I have asked readers what they want to see here, but have gotten merely generic encouragement.

Wayne Sayles recently blogged about collecting coins that others ignore. I think Wayne is on to something so I will write about that. Lately I have been interested in pre-Islamic coins and have applied to join the Oriental Numismatic Society.

My latest coin is a Kushano-Sasanian bronze of Peroz I from Balkh circa 245-270 AD. The obverse is said to read ΠIPΩZO OOZOPKO KOÞANO ÞOYO (Peroz the great, Kushan king) and depicts king Peroz standing facing, head left, sacrificing over altar and holding a trident in his left hand.

The reverse is said to read OOPZAOANΔO IAZAΔO (Exhalted God) but I don't know how they get that — I can't make out a single letter on any of the examples I've seen! It depicts the Exhalted God (Siva?) standing facing, holding diadem and trident, before the bull Nandi. The bull has very odd feet on this coin and several other specimens that I have seen.

For those interested in provenance and import issues this coin comes from the collection of Robert N. Cook, Jr. of Graham, North Carolina. The collection was largely assembled 50 years ago in Indian and Afghanistan. Unfortunately I have no documentation for this particular coin before a February 2015 auction.

Wayne's post advises you to collect what others are not interested in. This particular coin sold, unattributed, in a lot of 24 Kushan coins that went for $2 each at auction. They buyer flipped it on eBay for 10x that, misattributed as the Kushan ruler Vasudeva. It is likely that these coins will be more appreciated in a few years after dealers start using the new reference, Kushan, Kushano-Sasanian, and Kidarite Coins: A Catalogue of Coins from the American Numismatic Society, by David Jongeward and Joe Cribb with Peter Donovan. I have not seen that work yet but eagerly anticipate publication.

In Classical Deception (page 54) Wayne Sayles mentions the excellent patinas on Sicilian fake coins starting in the 1990s. After his book was published I noticed copies of the coin Sayles used as an example appearing in the printed catalogs of several dealers.

I was wondering recently if hand-held XRF guns could be used to identify real and false patinas and a web search lead me to a five-year-old post on FORVM by Lloyd Taylor referencing a 2009 paper in Mediterranean Archaeology and Archaeometry. The paper is “Ancient Coins and their Modern Fakes: an Attempt of Physico-Chemical Unmasking” by A. M. Mezzasalma, G. Mondio, T. Serafino, G. De Fulvio, M. Romeo, and A. Salici. 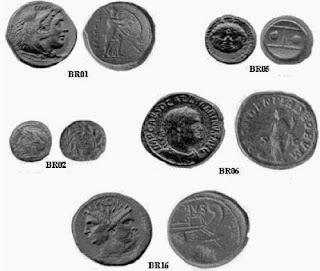 They analyze five fake bronze coins. This is the recipe the forger confessed to:

“…one of the most used recipes for fakes artificial ageing utilizes a solution composed by penthydrated CuSO4 [Copper Sulfate] together with HNO3 [Nitric Acid] and NH4Cl [Ammonium Chloride] in distilled H2O [Water]. In this solution, warmed up until 80‐90°C, the just produced fakes (at about 100 °C) are immersed. Such a bath gives them an artificial patina with an “antique green” colour and a deceptive antiquity appearance. Drops of the above CuSO4 solution on clean bronze surfaces may form dendritic structures with the same characteristics of those observed in our fakes.”

Note: the fake BR02, which the authors couldn't identify, is a Himera gorgoneion / pellets.

Under US law, countries that have a serious problem with looting / grave-robbing / metal-detecting are allowed to ask for a "Memorandum of Understanding" which lists the kind of artifacts being looted. Currently the US and Italy have one and it covers, among other things, coins of Greek Sicily. So Americans can't just bid in British and German auctions for such coins, because without paperwork showing the coins have been on the collector market for years it is against the law to bring them to the US.

The Italians are asking for an extension. The extensions last for five years. The extension doesn't have to cover the same stuff. It could cover fewer coin types or more coin types. If it covered all Roman Imperial coins it would be frustrating, because these coins would be selling openly in many EU countries, but Americans wouldn't be able to buy them.

Some folks would like to see all ancient artifact sales banned. Others feel the sale of common objects like coins and rings is not a big deal. The purpose of filing comments is so that the US representatives don't just rubber-stamp whatever the Italian representatives ask for.

American collectors should read It's Not Too Late on Cultural Property Observer's blog and leave comments for the US Government's Advisory Committee.