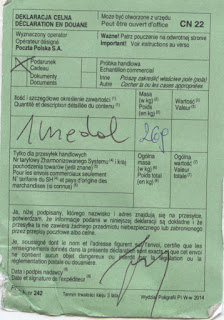 Yesterday I received a silvered bronze plaquette depicting a WWII event by the Polish artist Bohdan Chmielewski (1927-2014). The medal is interesting but instead of blogging about the medal I will show the Customs Declaration.

Americans usually don't have to pay customs duty for parcels worth less than $200. So I didn't skirt any payment requirement. I believe I am supposed to keep all Customs documentation for five years — so I cut the form 22 off the envelope and put it in the mylar 3.5x3.5 along with the medal.

My understanding is that Customs documents should be correct, but that if it isn't there is nothing I should do about it. I do not believe the US Customs Service expects me to inform them that I actually paid $35 plus shipping, or that the declared weight is wrong.

Many Parthian coins in very high grades are available for purchase. I have no data but it seems like dealer inventories are larger than usual. I wondered if this indicated new hoards had been found. I wanted to see if I could measure a change in the average grade of dealer advertised stock.

I was unable to do so because the letter grades given the coins do not correspond well with the coin's actual grades (as measured by the visible dots on the cheek straps of the helmet of Parthian coins.) With ancient coins, the dies degrade during use and some dies are higher relief than others. So unlike modern coins, which can be graded according to rules like 'number of stars visible', ancient coin grading involves looking at the entire surface of the coin for wear. I do not do that here, focusing only on the cheek strap of the Sinotruces' helmet. The grader of the coins below might have considered other parts of the coin that you don't see.

I could find no coins in Fine or lesser condition on acsearch.info. There are some available elsewhere, but acsearch.info shows only coins good enough to make it into auction catalogs.

Here are most of the Parthian Sellwood 33s on acsearch.info, sorted by grade. 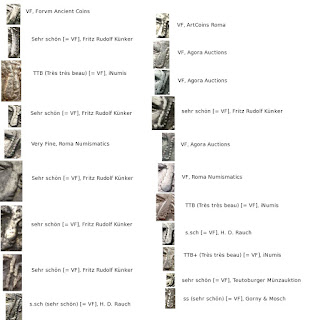 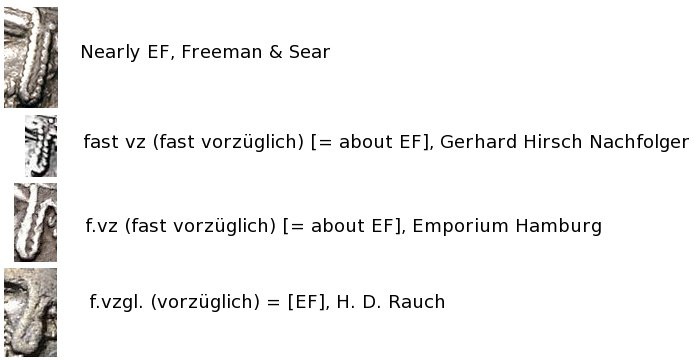 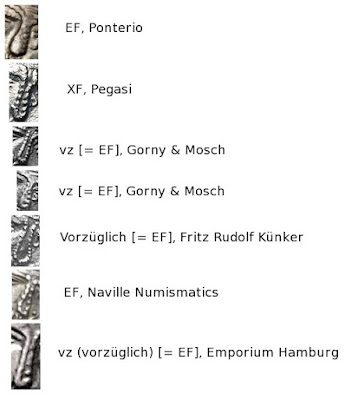 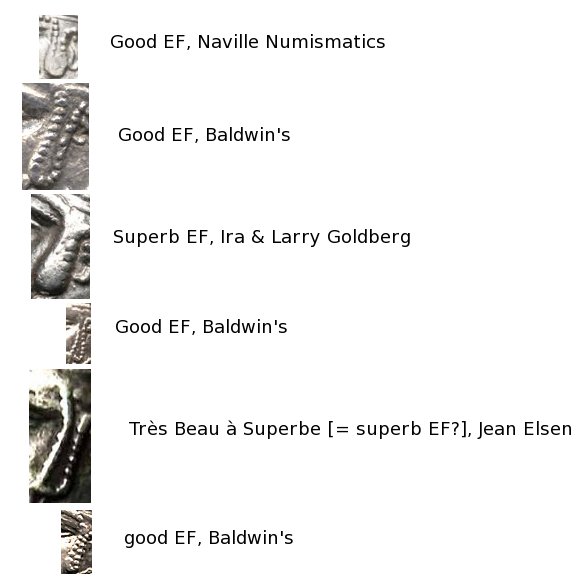 What's important is what we are NOT seeing. There is no more than a weak relationship between the definition of the individual dots and the dealer's chosen grade for the coin.

Because the seller's grades don't seem to line up well with the quality of the cheek strap, it is hard to say if there are better coins for sale or looser grading standers. I cannot therefore make any statistical claims about the true grades of coins being offered for sale. This data should warn buyers looking for a quality specimen to look closely at the photograph rather than trusting a dealer's letter grade.

Last Wednesday Ute Wartenberg Kagen spoke on a panel at the Metropolitan Museum in New York. I didn't get to see the panel, as the US State Department's live stream was down. The American Numismatic Society has posted a paper in which she gives her views, entitled Collecting Coins and the Conflict in Syria.

At the same event, Deputy US Secretary of State Tony Blinken announced a US$ 5,000,000 bounty for disrupting ISIL's antiquities trade.

Personally I suspect many of the antiquities come from the private collections of four million Syrian refugees, used as bribes to escape Syria, rather than a few ISIS looters. Yet it doesn't matter what I speculate. Dr. Wartenberg Kagan apparently shared the stage with the general counsel of the auction house Christie's and eBay's head of global regulatory policy. I suspect change is coming to the ancient coin market. What kind of change should we expect?

Germany is considering a law that will make it illegal to see ancient coins worth more than $100 without twenty years of provenance. Companies are free to go further than the law requires. eBay doesn't allow any Cuban coins to be sold on eBay, even ones that left Cuba before Castro's revolution cannot be offered on the site. My fear is that folks who are looking for something, anything, to do are seeing few options besides these kind of blanket bans.

Dr. Wartenberg's paper points out in a footnote that the American Numismatic Society rejects gifts of ancient coins from eBay and other online sites that have have no permanent record of their sales, unless older provenance is available. This has an important financial consequence, as such gifts would have been tax deductible.

Viewed as a purely technical problem, it wouldn't be difficult to create a permanent record of coin sales. A simple way would be create a printable report of newly offered coins, 20 coins to a letter or A4 side of paper. That's 40 coins on a double-sided page. VCoins.com currently offers 140,262 ancient coins, so that means 3500 pages or a nice 10 volume set of 350 page volumes. For perhaps $1000 the entire site, 140k coins, could be printed on demand and with copies sent to the the ANS in New York, the British Museum, and perhaps Paris, Berlin, Athens or Jerusalem. The receiving librarians stamp and catalog the books when they arrive, creating a permanent, personalized, physical record.

Such a record would be very good for resolving future, but not current, legal disputes. The obvious choice is to have sales portals voluntarily do this, but of course anyone with $1000 and HTML skills could do it, perhaps anonymously of copyright concern on sales text was an issue.

Of course, a permanent record isn't going to have a direct effect on the problems of smuggling. Printing out sale and auction catalogs in editions of five has the nice property of making low quality provenance available to collectors for less than one US cent per coin, generating data for future scholars, and making it harder to launder conflict antiquities with established antiquities.

Recently National Geographic ran an amazing cover story about a phony elephant tusk containing a GPS tracker. The mock tuck was acquired by a smuggler, and spent the spring of 2015 reporting on the smuggler's route across Africa.

Ancient coins are too small to hold the batteries needed for GPS trackers. I suspect the smuggling routes for conflict antiquities could be mapped in a different way. Unlike ivory, which is usually carved before being sold, coins get no more than a bit of cleaning. There is no reason anyone couldn't photograph 100 ancient coins and just leave them out near recent digging activity. A few years later photographs of dropped coins could be released publicly, with a contest to find them online. This technique would establish entry and exit points of the smuggling. If a government were interested, subpoenas could then be deployed to explore the route more fully.

I don't think this kind of mapping would be enough to earn the reward Deputy Secretary Blinken mentioned. It might be enough to get a cover story in the major numismatic publications.