For many years I suspected the animated coins above were modern forgeries. The first die in the animation looks very strange. There are dots within the snakes surrounding Medusa, a very unusual feature. The first die shows blunders, such as two dots on the tongue. The snakes near the cheek have poorly made circles.

The reverse die has some unusual features. It appears octagonal rather than the typical round or square. The shackle above the anchor seems to float above it. There are weird scratches on it. 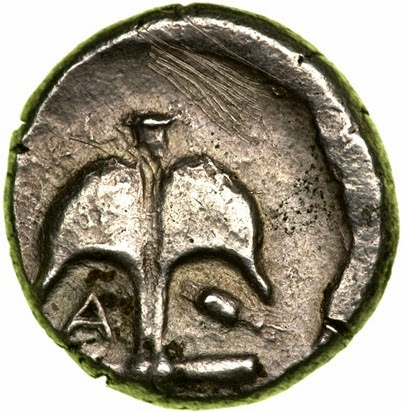 For years I gathered images from this coin and die-linked coins, hoping to prove it was fake. I was even working on an essay explaining my reasoning. Some of the die-linked coins have strange die re-engravings and post-strike damage.

I now think it is genuine. Stay tuned.