I am uncertain what pottu kasu is. Google translates it as 'spud benefits'. A Reddit commentator transliterates it as pattu kasu or padi kasulu and translates it as 'ten cents'. A sovereign weights 8g and these coins were 1/20 that so perhaps the coins are gold fanams.

The coins were discovered by accident by workers digging a septic tank. The report focuses not on the coins, but on how the finders attempted to divide and keep the coins.

Periyannan took the metal box and broke it in the presence of the farmer. To their surprise, they found small gold-like coins. They believed that someone might have buried the metal box with coins after performing rituals to ward off evil spirits. The farmer transferred the coins to a plastic container and kept it in his house. ...

The worker along with Kabilan and another person reached Murugan's house and demanded their share. Murugan came forward to hand over the entire treasure to them but the worker and others took only 43 coins ...

Meanwhile, Ramasamy's wife Anjalai reached Periyannan's house and created a ruckus when she learned that he had got a share of the coins while her husband had not. The news soon spread in the village and the villagers informed the police.

Cameron Keng writes for Forbes that the Mt. Gox web site has been hacked and shut down.

744,000 BitCoins, until recently worth over $400 million USD, were hacked. As far as I can tell there is no way to get the coins back. One million folks kept accounts, called 'wallets', on the site.

Who stole it? Well, there is a Bitcoin address that recently had BTC782,000 move through it. That address is now empty, but scroll down and see large BTC payments going all over.

Does anyone speak Romanian? I found an article (no byline?) suggesting

Police confiscated [at] a numismatic and philatelic market in Brasov 154 old coins, some dating from the second and first centuries BC, and others [from] the medieval period that would come from archaeological sites which were sold illegally at fair prices between 5 and 20 lei.

Dealing with the small change shortage in modern Palestine

Writing for y-net-news.com, Elior Levy reports on improvised replacements for the vanished half-shekel coins in occupied Gaza. Bus and taxi drivers either give change in candy, or round-up when traveling in one direction and round-down when traveling in the other. Although small change is still being minted,

Gazans have been running low on Israeli coin currency for a while, partly due to an Israeli-imposed ban on copper imports. The creative solution engineered by Gazans was to melt down change to create copper wire.

Is it possible that the "Amazon" coins depict not a generic Amazon, but the one most important to Mithradates, his wife Hypsicratea? It would be wonderful to have a coin with the features of this legendary Amazon queen.

Many of Mithradates’ types seem to illustrate the myth of Perseus. There are tetradrachms with Pegasos reverse, large bronzes of Athena head/Perseus, large Perseus/Pegasos bronzes, this aegis/Nike bronze, and a small bronze Perseus/harpa. Barclay Head explained in 1911 the significance of the types: “On these coins the supposed Persian descent of Mithradates is emphasized by the types relating to Perseus.” Mithradates’ other bronze types include Zeus (who fathered Perseus) and Dionysos (who fought Perseus).

Warwick Wroth speculated in 1889 that the female head in ‘wolf’s skin’ type issued by Mithradates represents Andromeda. Wroth suggested that the ‘wolf’s skin’, which Mionnet called goat’s skin and James Millingen called griffin’s skin, is the skin of the ketos slain by Perseus. Mithradates’ other types are identified as “Ares” (?), “Head in leather cap”, and “Artemis”. These mythological figures are all identified by style; there is no certainty that Ares and Artemis are the correct identification. Those coins could depict other characters from Perseus’ cycle and we would not know. 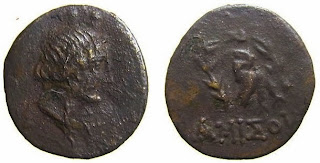 This coin, with the inscription AMISOS in Greek, recently sold on eBay Germany for about 100 euros.

I don't think I've seen this type before. I didn't bid on it, as it isn't in my collecting area, but my mind keeps drifting back to it. The reverse seems to depict a bird, but it is not the usual eagle pose or the rare owl used by Mithradates VI.

The same seller also offered some of the typical Mithridates types of Amisos, but also the seldom seen Amazon/Nike and the almost never seen Artemis?/Owl types.

Any thoughts on who is pictured on the mystery coin? 24mm, 6.5g. 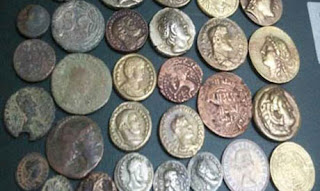 Reporting for Ahram Oline, Nevine El-Aref writes “The 739 supposedly Mameluke-era coins discovered in a Cairo apartment have been deemed unauthentic by an archeological committee from the Museum of Islamic Art.”

It is uncertain if the photo in Ahram Online depicts the coins themselves or is a stock photo. Perhaps a stock photo, because the Museum Director General says the coins depict Italian and European dukes of the Mamluk era (1250-1517 AD).

“A Libyan citizen accidentally found the coins hidden in a wall while carrying out routine maintenance on his Nasr City apartment.... [Mostafa] Khaled from the MIA asserted that the coins would be melt[ed] down so that they can't be used as fakes in the antiquities trading market.”

Alfredo De La Fé is reporting that well-known Chicago coin dealer Harlan Berk is accepting Bitcoins as payment for coin auctions. According to the Berk website:

For Bitcoin Payments: Please make your order from our web site using the wire as payment option. After orders are received we will send out a request for Bitcoins through Coinbase.

I have decided I need some BTC and have created a wallet on Coinbase. Please click this button to donate 1/1000 of a BitCoin to me. Donate Bitcoins