No coins, but the largest hoard of Anglo-Saxon gold was recently found in England. [New York Times]. NPR [audio + transcript].

... the discovery was not the outcome of a carefully planned archaeological enterprise, but the product of a lone amateur stumbling about with a metal detector.

Here in the US there aren't any Roman treasures to find with metal detectors. Or are there? In 1924 Charles Manier found two gigantic lead crosses with Roman-Jewish inscriptions outside Tucson Arizona. The crosses, swords, and other “Roman” relics were supposedly exhibited in Tucson in 2003 according to Western & Eastern Treasures magazine's copy of a story from the Tucson Citizen. However, the story doesn't show up in 2009 search of the Tucson paper's archives nor does it show up in current or archive.org searches of the Arizona State Museum's web site.
Posted by Ed Snible at 3:20 PM 1 comment: 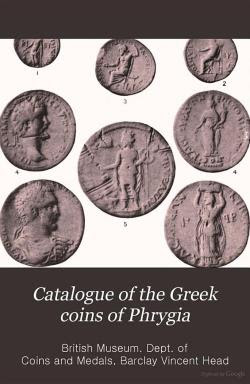 The judge overseeing Google's controversial agreement with American publishers to digitise millions of books has delayed a hearing into the $125m deal - effectively shutting down the settlement and sending it back to the drawing board.

The deal, if and when it happens, will allow Google to sell out-of-print in-copyright books that it doesn't have the rights to. The money would go into a lockbox that the copyright holders could get when they realize they own money-making orphan books.

The good news is that Google and On Demand Books have a partnership to print public domain titles in bookstores using the Espresso Book Machine. You'll be able to walk into bookstores (currently in San Francisco; New Orleans; Ann Arbor; Manchester Center, Vermont; and Provo, Utah) and for $8 walk out with a paperback book such as Catalog of the Greek coins of Phyrgia.

And look at that cover! I feel certain it was auto-generated. I may be the first human to have ever seen the cover of this numismatic book, when I opened the web site this morning. If the Espresso Book Machine ever makes it to New York I will be ready with many titles I'm willing to pay $8 for. If the Google deal had gone through many titles from the 20th century could have been available for just a little more.
Posted by Ed Snible at 11:10 AM 1 comment:

Charles Davis is holding a mail bid sale [PDF] October 17th. 691 lots. Many titles on British tokens. Lots 491-578 are titles on ancients and many of the ancients titles are useful catalogs: SNG volumes, Crawford on Roman Republican, RIC volumes etc.