bleg: Where can I get a Zero Rupee note?

I blogged two years ago about the zero rupee note. I would like one for my collection and have been unable to locate them. Does anyone know where I can find a collectable one? Preferably one that actually was used over a gem unc specimen.

High resolution zero rupee notes can be downloaded from 5th pillar. Maybe the intention is that users should print them themselves.

The World bank is now blogging about the notes.

The notes are available in the Tamil, Hindi, Telugu, Kannada, and Malayalam languages.
Posted by Ed Snible at 8:39 AM 2 comments:

Is the word 'triskeles' the plural of 'triskele'? 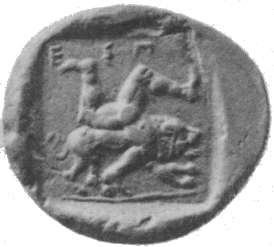 In numismatics, 'triskeles' is singular. For example, John Melville Jones (A Dictionary of Ancient Greek Coins) defines it as “... a device formed or based upon three legs joined at the hip...”. [emphasis mine].

The earliest English reference in Google Books to 'triskele' is 1868, The runic hall in the Danish old-northern museum by George Stephens. The earliest singular reference to 'triskeles' is an article on acquisitions of the British Museum in The Classical Review from 1889.

I discussed this topic in a thread on FORUM's Classical Numismatics Discussion Board where it came out that the Greek word Tri-skelês is an adjective and thus neither singular nor plural. A similar Greek word that made it into English as an adjective is 'isosceles' used to describe triangles.

I believe there are enough authorities using 'triskeles' as a singular to get it into the OED and other dictionaries as a variant spelling of 'triskele'. Certainly Barclay Head uses it as singular, and the OED cites him as an authority under 'triskeles' (for the similar word 'triskelion'). I think we have a case of the same Greek word being borrowed into English twice — with different spellings!
Posted by Ed Snible at 10:38 PM 2 comments:

Syracusan dekadrachms for sale, in Chicago, below melt value

The coins were stolen on June 3, 1939 from the Philadephia Academy of Fine Arts. “Gis Butz, 54 years old, who had one of the [dekadrachms], and Nicholas Niketas, 45, who had the other nine, had been charged with with disorderly conduct.... Nate Lew is aiding the police in tracing the three coins still missing.”.

Imagine walking into a second-hand store with 10 dekadrachms and 13 other museum quality ancients, asking for $5 or $10 for the lot, and being talked down to $2! Nate Lew drives a hard bargain.
Posted by Ed Snible at 9:07 AM No comments:

There is a big coin show in New York City this week. I'll be there tomorrow.

Here is an article on coin show security by Col. Steven Ellsworth.
Posted by Ed Snible at 10:12 AM No comments:

I remain too busy to post. Here is a link to Robin Healey blogging for Bookride on book thieves.
Posted by Ed Snible at 8:15 AM No comments: