Collectors have the opportunity to comment against Cypriot import restrictions

Ancient coins struck in Cyprus before 235 AD cannot be imported into the United States unless they have an export permit from the Government of Cyprus or documentation they left Cyprus before July 16, 2007. It is believed that no export permits are granted for coins. So American collectors can typically only buy coins from US-based dealers.

This policy, the “Memorandum of Understanding” between the US and Cyprus, is up for review. The Ancient Coin Collectors Guild is suggesting collectors send public comments to the US Government by September 30th. Our hope is that if enough pro-collecting comments are heard a way will be found for some categories of Cypriot coins whose history cannot be tracked before 2007 to enter US collections.

I object to coins appearing in the Memorandum between my government and Cyprus. It is not because I hate all regulations! I object to it because a 100% ban for coins that lack pre-2007 publication means there is no motivation for collectors, archeologists, and the people of Cyprus to have a dialog on different rules that would let us work together.

To me it is obvious that medium-cost export licenses combined with cash rewards for reporting unlicensed antiquity exports would put a halt to the problem. If I don’t object to a simple renewal of the MOU there won’t even be a chance to for folks such as myself to even propose something different than the blanket ban.

If you think ANYTHING other than a blanket ban on coins is appropriate please leave comments asking for coins to be reconsidered in the renewal.

The gorgons of Mallos part 3

Web sites and reference books for Greek coins group the coins by city. For example, Wildwind.com's Mallos entry contains the coins struck under the authority of Mallos.

The typical arrangement skips over coins struck under the authority of a king and used in the city. For Mallos Wildwinds shows nothing for the centuries between a stater of Balakros (struck some time between 333 and 328 BC) and coins of Caligula (struck AD 37-41). Coins issued from 328 BC to 100 BC at Mallos will be hiding in catalogs of Seleukid coins.

The coin at the top of the post depicts a side view of Medusa. The reverse shows Nike standing left holding wreath. Arthur Houghton and Catherine Lorber and Arnold Spaer place the type under the mint at Mallos. [SNG Spaer (1998), p. 150 #1006]. They connect Medusa to the aegis of Athena Magarsia, not to the earlier tradition of gorgoneions at Mallos.

The Gorgons of Mallos

It will soon be difficult to sell autographed slabs in California

David Siders reports for the Sacramento Bee that California Governor Jerry Brown has signed a law with a lot of new requirements for selling autographed items (such as books and coin slabs) in their state.

The bill was promoted by Assemblywoman Ling-Ling Chang, and Jedi Knight Luke Skywalker. The full text of the law is here and I could not understand it. I I have seen nothing about this law on numismatic trade web sites. 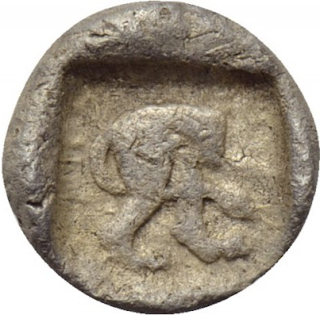 A very unusual reverse on an ancient Greek diobol! The reverse side literally depicts the lion's tail end.

Typically on ancient Greek coins it is the front half of the animal that appears. The front half is called a 'protome'. There is no word for the back half appearing, as there hasn't been a need.

From today's Numismatik Naumann auction (lot 181). I am neither the buyer or seller.