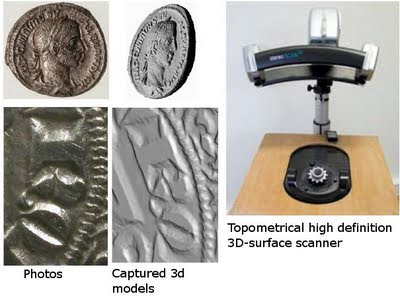 I recently became aware of a paper on 3D scanning of ancient coins delivered two years ago at the 22nd CIPA Symposium. The paper, by M. Kampel of the Pattern Recognition and Image Processing Group at the Vienna University of Technology along with S. Zambaninia, M. Schlapke, and B. Breuckmann, is available online.

The group scanned 16 ancient Roman coins and 9 medieval coins using a 3D surface scanner. They produced 3d models of the coins that look quite good! I would be curious to know how long it takes to scan a coin.

I have mentioned Martin Kampel's work before. He worked on automatic classification of ancient coins for the European Union's COINS project. This new research was partly paid for by the same European Union grant that underwrote COINs.

I would also be curious to know if a commercial service could scan my collection for a fee. This technology, if commercialized, could benefit collectors who are often obligated for insurance reasons to keep their coins in a safety deposit box at the local bank.

Laser scanning has so many advantages. I found this information from here. Thank you so much for providing this kind of things. You can use us to get the perfect result, because of verifiable ability and responsibility. laser scanning Denver, Colorado are also providing their best.